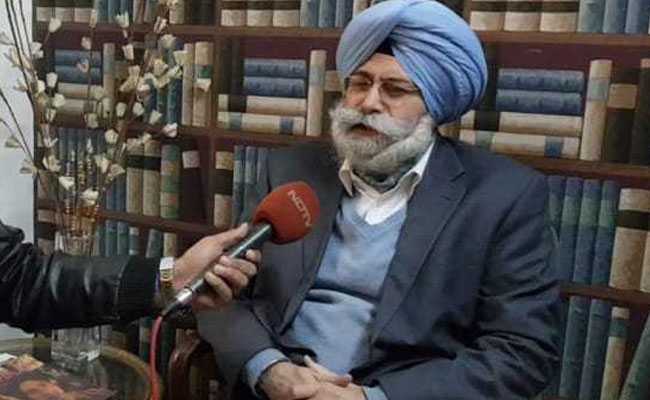 HS Phoolka had quit as a legislator in the Punjab assembly in October.

Senior lawyer and Aam Aadmi Party (AAP) leader from Punjab, HS Phoolka, who has been representing victims of the 1984 anti-Sikh riots in courts for the last three decades, has resigned from the party today.

"I have resigned from AAP and handed over resignation to Kejriwal ji today. Though he asked me not to resign but I insisted," tweeted Mr Phoolka, who had joined the party in 2014.

Mr Phoolka added that he will brief the media tomorrow to explain why he is leaving AAP and his further plans.

Sources close to Mr Phoolka say that he has been upset with the party since the whole controversy regarding an amendment aimed at withdrawing late Prime Minister Rajiv Gandhi's Bharat Ratna over his alleged failure to contain violence in 1984.

The party's flip-flop on the resolution could be one of the reasons why Mr Phoolka decided to leave, they added.

Mr Phoolka had stepped down as a Punjab legislator in October last year demanding immediate action in the sacrilege of the Sikh holy book the Guru Granth Sahib in Punjab in 2015. Mr Phoolka had claimed that the Congress government had not taken the desired action against those named in the findings of the Justice Ranjit Singh Commission's report on the sacrilege incidents.

The panel was tasked to probe the cases of sacrilege as well as a firing incident in Faridkot in which two Sikh protesters were killed.

In 2017, when the Delhi Bar Council stopped him from appearing in the 1984 anti-Sikh riots cases against Sajjan Kumar and others, saying he enjoyed an office of profit, Mr Phoolka had quit as the leader of opposition in the Punjab assembly to continue his fight for justice.

The 63-year-old lawyer had said he had been fighting the cases for a long time, and they had reached a very "crucial" stage. "Will not give up '84 carnage cases. Would rather quit as minister. My presence in anti-Sikh riots cases is important at this stage; that is why I decided to quit as the leader of opposition," he had said.

At least 3,000 people were killed when mobs led by some Congress leaders targeted Sikhs after the assassination of then prime minister Indira Gandhi by her Sikh bodyguards on October 31.

Last month, after former Congress leader Sajjan Kumar was convicted for the murder of five members of a family in Delhi's Raj Nagar and the torching of a gurdwara on November 1, 1984, Mr Phoolka got emotional and said, "It's a huge victory. This moment has come after 34 years."

Sajjan Kumar was sent to the Mandoli jail in east Delhi on December 31, the day he surrendered. But the former minister has challenged his conviction and jail sentence by the Delhi High Court in the Supreme Court.