RCP Singh claimed that it is a "blatant lie" that he did not seek Nitish Kumar's consent before becoming a central minister. 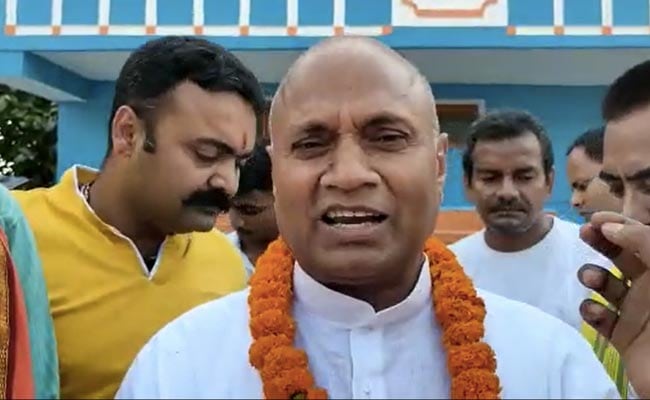 RCP Singh said he was now not averse to joining the BJP. (File)

The former Union minister, who quit the party in disgrace less than a fortnight ago, said he was now not averse to joining the BJP and claimed that he was "opposed" to yet another volte-face by Mr Kumar, a reason why his former mentor was now gunning for him.

The bureaucrat turned politician, who was in the eye of the political storm that swept across the state recently, was talking to reporters in the Gopalganj district where he went to offer prayers at a shrine.

The former UP cadre IAS officer, who hails from the same Nalanda district as the Bihar Chief Minister, made a tongue-in-cheek remark when asked about Mr Kumar has earned the epithet of "palturam" (turncoat).

"I would not agree to the name of Ram being dragged into this. But, yes, the political somersaults will cause many such unflattering labels being attached to him," said Mr Singh, who had to give up his berth in the Union cabinet last month after the JD(U) denied him another term in the Rajya Sabha.

He claimed that it is a "blatant lie" that he did not seek Nitish Kumar's consent before becoming a central minister.

"Had it been so, he would not have asked me to give up the post of national president citing one person one post rule and JD(U) leaders would not have congratulated me upon induction into the cabinet", Mr Singh said.

"After the UP assembly polls, I had sensed that Kumar has made up his mind to switch sides again. I was opposed to that. This infuriated him and therefore I am now being accused of being a part of a BJP conspiracy," said Mr Singh.

Charging his former mentor with "political dishonesty of the highest order" in having sought the mandate as the NDA's Chief Ministerial candidate and quitting the alliance to join hands with the RJD, Congress, and Left combine, Mr Singh claimed Nitish Kumar would end up "merging" the JD(U) with Lalu Prasad's party.

Referring to Mr Kumar paying a courtesy visit to Mr Prasad on Wednesday night, RCP Singh said, "You (JDU) have only 45 MLAs. They (RJD) have 79. There is no choice but to prostrate." Asked about his own future plans, Singh said he had "all options open" and said "why not" in reply to a pointed query as to whether he would like to join the BJP.

He, however, reiterated that Nitish Kumar "will not become the prime minister, even in seven lifetimes", underscoring that the current times were not like the 1990s when leaders like Chandrashekhar, Deve Gowda, and IK Gujaral had brief stints because of prevailing political instability.

When Mr Kumar's attention was drawn to RCP Singh's diatribe, he threw up his hands in disgust and exclaimed "chhodiye!" (just leave it).

However, his old associate and the JD(U)'s current national president Rajiv Ranjan Singh alias Lalan called RCP Singh "shameless" in accusing Nitish Kumar of "telling a lie" and asserted that by expressing intentions of joining the BJP, the charge of his being an "agent" of the saffron party stood proven.

"RCP Singh was very much in JD(U) when we had our last tie-up with Lalu in 2015. He was fine with it then. Why is he having problems now? He was a BJP agent who worked towards weakening his own party. Now that he wants to join the BJP, it comes as no great news," said Mr Lalan.

The JD(U) chief also lambasted the former national president for predicting its merger with RJD and asked "what does he know about the JD(U) and its history? He was a personal staff of Nitish Kumar who owed his political standing to the benediction of his boss".

Mr Lalan also remarked with displeasure: "Never did Nitish Kumar say that he was aspiring for the prime minister's post. It is his followers in his party who say that he deserves to reach the top. Our leader simply wants to bring all parties opposed to the BJP together and pose a challenge in the 2024 Lok Sabha elections. And he will succeed in this."