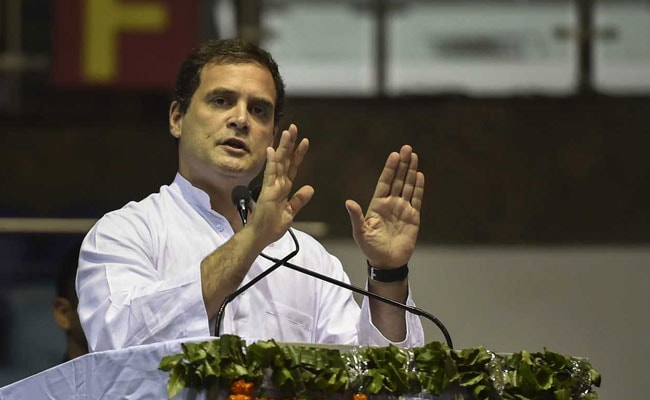 Rahul Gandhi arrived in London on Thursday for a two-day tour. (File)

Congress President Rahul Gandhi arrived in London on Thursday for a two-day visit and comparisons were soon drawn between Prime Minister Narendra Modi's November 2015 London trip to that of Mr Gandhi's first visit to the United Kingdom as Congress President.

The Congress leader arrived in London on Thursday evening from Berlin for the two-day visit, which is packed with a set of meetings, interaction with parliamentarians, students, doctors, businessmen and UK Congress cadre.

Mr Gandhi is being accompanied by a 10-member squad of Congress leaders like Shashi Tharoor, Millind Deora, Sam Pitroda and Divya Spandana.

"There has been a great interest with a huge response to the visit. In fact, we did not get a chance to advertise the visit and had to book an extra hall for the mega conference," said Kamalpreet Singh Dhaliwal, IOC president, UK.

Mr Gandhi will address parliamentarians in the UK at a cross-party event at the Grand Committee Room in the House of Commons complex.

He will later address students from across the UK in the event, "In Conversation", at the London School of Economics (LSE) with LSE South Asia Centre Director Mukulika Banerjee, organised by the National Indian Students and Alumni Union.

On Saturday, Mr Gandhi will start the day with a meeting with the members of Indian Overseas Congress (IOC) representatives from the UK over breakfast.

The 2019 General Elections in India will be the agenda of the meeting. He will also be attending a "working lunch" organised by the Indian Journalists' Association (IJA) before addressing a healthcare symposium organised by the UK's Royal Society of Medicine.

He will end the two-day London visit with what is being described by the UK Congress as a 'mega conference' involving the Indian community in the country. This will be held at Ruislip in North west London on Saturday evening, and sources say, close to 1,300 people are likely to attend the evening with Mr Gandhi.