In a rain-related incident, two people are feared drowned in Devbhumi Dwarka district while trying to cross a swollen river while another person was rescued by villagers. 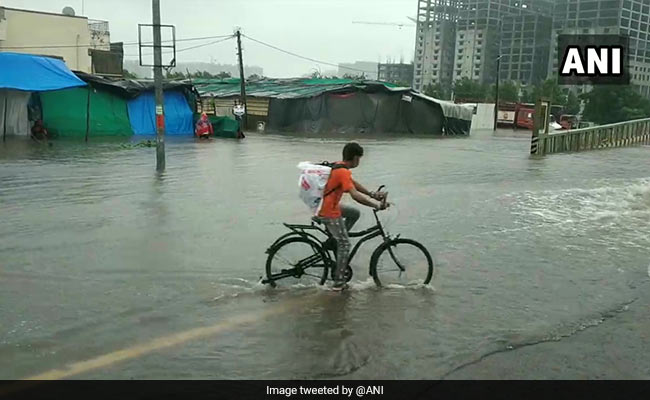 In a rain-related incident, two people are feared drowned in Devbhumi Dwarka district while trying to cross a swollen river while another person was rescued by villagers.

In Surat city, water of Mithi Khadi creek gushed in in several low-lying areas, after inflow of water increased in Ukai dam, officials said, adding that many roads went under water.

In Surat district, more than 1,500 people were shifted to safer places, including over 1,100 in Udhna area of the city, said local disaster management officials.

The water level of the Tapi river rose after water was released at the rate of about 70,000 cusecs in the Ukai dam, they said.

"Monsoon remained vigorous over Gujarat region as well as Saurashtra-Kutch, with the cyclonic circulation over Kutch and adjoining south Pakistan shifting towards south Gujarat region," the met department said.

"Local administration has made arrangements for the food and stay of the affected people. We have deployed boats to shift people to safer places. Premises of nearby schools and other institutions have been opened for the purpose, and food packets are being arranged," Mr Pani said.

In Vadodara too water gushed in in slum areas, necessitating evacuation of residents, officials said.

Residents of areas located by Sama-Savli road were forced to park their vehicles on flyovers, as the water level went up.

The water level of the Vishwamitri river, which flows through Vadodara, rose due to the release of water from the Ajwa reservoir.

The river is currently flowing at the level of 23 feet, close to the danger mark of 26 feet, officials said.

Officials said 305 people from slums located in Karelibaug and Subhash Nagar areas in Vadodara and parts of the district were shifted to safer areas.

Chief Minister Vijay Rupani said he was keeping a close watch on the situation in view of the alert of heavy rainfall in south Gujarat.

"Rain has abated since last afternoon, and (Mithi) Khadi creek water is receding. But in view of heavy rainfall alert in south Gujarat, we are constantly on the watch. As many as 70,000 cusec water is being released in Ukai dam (near Surat).

"In Vadodara, water from Ajwa lake is also being released. We are in touch with the officers and ministers," the chief minister told reporters.

He said preparations were being made to ensure that people do not face much trouble in the event of heavy rains as predicted, he said.

Kaprada taluka in Valsad district in south Gujarat received 161 mm rainfall in ten hours till 4 pm on Saturday, which is the maximum in the state.

Waghai in Dang received 98 mm rainfall during this period, as per the State Emergency Operation Centre (SEOC).

A total of 306 roads, including a national highway in Anand district, remained closed due to flooding, SEOC officials said.

Due to heavy rains, many rivers are in spate. Gujarat has so far received 74.56 per cent of the average rainfall.

"Sadly, Not First Such Case": India Slams Pak Over Killing Of 2 Sikhs