BJP Karnataka took a dig at HD Kumaraswamy by referring to him as "Anna" (big brother), as the chief minister is usually referred to. 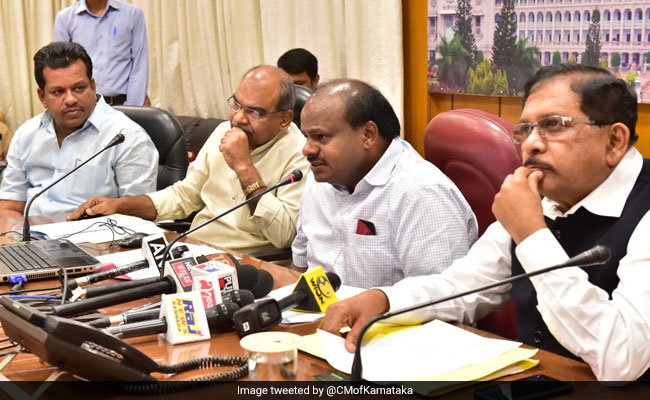 Karnataka BJP on Saturday hit out at Chief Minister HD Kumaraswamy for claiming credit for the arrest of underworld gangster Ravi Pujari from Senegal and asked him to show "some guts" and stop crimes in the state.

BJP Karnataka also took a dig at HD Kumaraswamy by referring to him as "Anna" (big brother), as the chief minister is usually referred to.

The party also asked the chief minister show his "virility" by arresting Congress MLA JN Ganesh, missing for nearly a week since he was booked on an attempt-to-murder charge after he allegedly assaulted lawmaker Anand Singh during a brawl at a resort in Bengaluru.

Reacting to the BJP barb, Mr Kumaraswamy questioned why the party did not get Ravi Pujari arrested when it was in power. He assured action against JN Ganesh in accordance with law.

Ravi Pujari, facing more than 30 cases, including a 2009 murder case, in Mangaluru was arrested on January 19 from Senegal.

CM @hd_kumaraswamy claiming credit for arrest of criminal Ravi Poojari by West African police is like @H_D_Devegowda claiming credits for killing of Bin Laden by US.

Wake up & first show some guts to stop the crime in Karnataka.

"Anna (Big brother) Kumaranna, before giving kudos to your self by claiming that Ravi Pujari was arrested by the coalition government, show your virility by arresting Kampli MLA Ganesh," it said in another tweet in Kannada.

On Friday, Mr Kumaraswamy said the Congress-JD(S) government in Karnataka played a leading role in getting Ravi Pujari arrested.

On Saturday, he asserted BJP need not have any doubt and he would not compromise for the sake of power and protect those who indulged in illegal activity.

"Ravi Pujari's illegal activities had started in 2001; BJP also ruled the state for five years. BJP has tweeted with respect- calling me Anna- I want to ask that brother (BJP) what did you do for five years when you were in power," he said.

Speaking to reporters in Mysuru, Mr Kumaraswamy said his government had made efforts in the last six months to arrest Ravi Pujari.

The state government officials maintained a constant communication with the Senegal government. "We have already given instructions to arrest Ganesh. Whoever has committed mistake will not be protected at any cost and action will be taken against them in accordance with law, but there are procedures for it. Case has been booked and officials have initiated action," he added.

The Congress has suspended JN Ganesh from the party.