Rahul Gandhi Detained On Way To Hathras, UP Cops Take Him Back To Delhi

The woman died on Tuesday at a hospital in Delhi. She had suffered multiple fractures, paralysis and had been left struggling to breathe by a neck injury when she was assaulted by four upper caste men from her village on September 14.

Hathras Gang Rape: In visuals, Rahul Gandhi was seen resisting policemen who were trying to stop him

In dramatic scenes on the highway between Delhi and Uttar Pradesh today, Congress leaders Rahul Gandhi and Priyanka Gandhi Vadra were detained as they headed to Hathras to meet the family of the gang rape victim who died on Tuesday and whose dead-of-night cremation by the UP police has provoked nationwide outrage. Rahul Gandhi alleged that he was pushed to the ground and lathi-charged when he and Priyanka Gandhi were marching on the highway after their convoy was stopped by Uttar Pradesh policemen. They were later released and taken by the policemen back to Delhi.

"Why are you arresting me? What are the grounds for the arrest? Please tell the media what sections are they," Rahul Gandhi said in a heated exchange with policemen, who said that they were charging him with "Section 188" - a law on defying official orders. The police argued that large gatherings were banned in the area.

In visuals, the Congress leader was seen resisting policemen who were trying to stop him. The Congress MP, pushed around in the chaos, fell to the ground.

"Just now police pushed me, lathicharged me and threw me to the ground. I want to ask, can only Modi Ji walk in this country? Can't a normal person walk? Our vehicle was stopped, so we started walking," Rahul Gandhi said, targeting Prime Minister Narendra Modi. 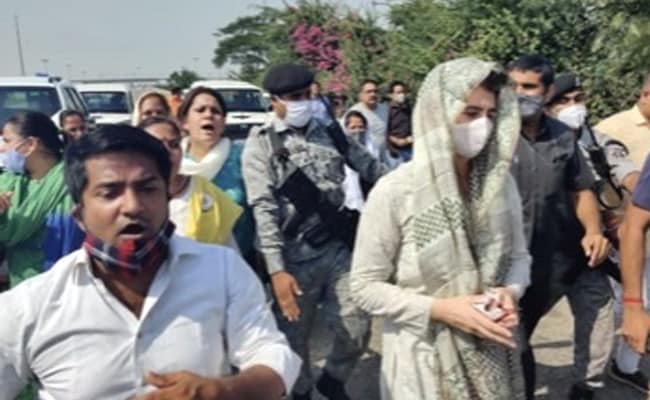 Priyanka Gandhi started a foot-march as her convoy was stopped.

The Gandhis also briefly sat on the road with hundreds of supporters. "It is a photo-op by the Gandhis," scoffed UP minister Siddharth Nath Singh.

Ahead of the Congress leaders' visit, the UP administration had this morning put up barricades on the roads to Hathras citing the coronavirus.

The Gandhis' SUV crossed the Delhi-UP border but their convoy was stopped at Greater Noida, at a point that is about 142 km to Hathras. Rahul Gandhi and Priyanka Gandhi climbed out of their vehicle and started walking with scores of Congress workers, shouting slogans against UP Chief Minister Yogi Adityanath. A short while later, they faced a large group of UP cops who tried to push them back.

The Samajwadi Party also protested at the Hathras border, where they were stopped from proceeding to the woman's village. Since morning, reporters had also been barred from the village.

UP officers claimed the restrictions had been in place since September 1 and has been extended to October 31. A senior official claimed several policemen had shown Covid symptoms. However, the Congress alleged these were tactics to prevent the Gandhis from entering the village.

The woman, 20, died on Tuesday at a hospital in Delhi. She had suffered multiple fractures, paralysis and severe spinal injury when she was assaulted by four upper caste men from her village on September 14. The police said there was a gash in her tongue because she had bitten it when the men were trying to strangle her.

To add to the family's pain, the UP police took away her body, drove to her village and cremated the body forcibly, with the family locked in their home. The woman's parents had begged to be allowed to take her body back home and perform the last rite the following morning. The woman was cremated at 2.30 am with only a few policemen around and no family member. The UP police's rush to cremate the body was seen to be a desperate attempt to cover-up what has been a string of lapses in the case.

The woman's family alleged that the police had been slow to respond to their complaint and the administration had been negligent because they belong to the Dalit or underprivileged castes.

The incident has drawn public anger and the UP government of Yogi Adityanath has come under attack from several opposition parties over recent crimes against women.

Rahul Gandhi had said yesterday: "All this is a shameful move of the UP government to suppress the Dalits and show them their ''place'' in the society. Our fight is against this hateful thinking." Rahul Gandhi was an MP from Uttar Pradesh for three terms until he lost in his family stronghold Amethi last year.

His sister Priyanka Gandhi, who has the task of rebuilding the Congress in UP, said Yogi Adityanath had "no moral right" to continue in office.

This is not the first time the Gandhis faced roadblocks in Uttar Pradesh.

Last year, Rahul Gandhi and Priyanka Gandhi were stopped from entering Meerut in UP to meet the families of people killed in violent protests against the amended citizenship law. The police had cited Section 144, or a ban on gatherings, which is now in place in Hathras.

In December, Priyanka Gandhi accused the UP police of manhandling her in Lucknow to stop her from going to the house of a retired police officer arrested over the citizenship protests. When her car was stopped, she even rode pillion with a Congress worker to try and reach the house. Before that, in July, the Congress leader was stopped from visiting Sonbhadra where 10 people were shot dead in a village. Priyanka Gandhi then sat on a protest for hours.