"Nearly 1.5 lakh migrant workers want to return to Haryana while 8 lakh of them have registered themselves for leaving the state for their native states," Home Minister Anil Vij said. 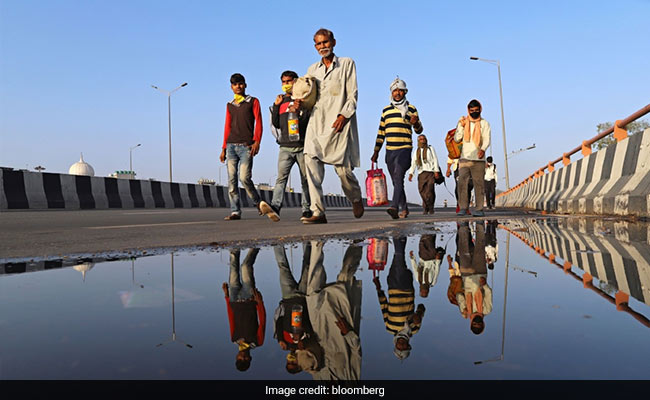 Most of them, who have registered, belong to Bihar, Uttar Pradesh and Madhya Pradesh (Representational)

While nearly eight lakh migrant workers stranded in Haryana have registered themselves on a government portal to return to their native states, over 1.5 lakh of them have applied on the same portal from different states to return back to work, state Home Minister Anil Vij said on Saturday.

Mr Vij said most of these 1.5 lakh workers, who have registered themselves to return, belong to Bihar, Uttar Pradesh and Madhya Pradesh.

He also said on the same portal nearly 8 lakh migrant workers, however, have registered themselves for leaving the state.

"Nearly 1.5 lakh migrant workers want to return to Haryana while 8 lakh of them have registered themselves for leaving the state for their native states," Mr Vij said.

"Most of the 1.5 lakh who want to come back are from Bihar, UP and MP. They want to come here as commercial activities have started and they are hopeful that they can find a job," he said.

Asked how Haryana can facilitate those migrants willing to come back during the lockdown, Mr Vij said, "We are talking to the states to which they belong."

Most of the migrants who want to return have applied to come to industrial towns of Gurgaon, Sonipat, Jhajjar, Rewari, Faridabad and Panipat, said officials.

They said that most of these who have applied to return may have left before the lockdown or during its initial few days.

Asked if the resumption of the state's industry and economic activities would not be affected due to more workers seeking to leave the state and than those willing to return, Mr Vij said, "We and the rest of the country and the world is facing a situation that we are bound to face some difficulties.

"But we cannot stop those migrant workers who want to go back with their states too being ready to have them back. We can only persuade these workers and we are already doing that. We are seeking to assure them that the Haryana government will take care of all their needs, but we cannot force them to stay back," he said.

Haryana Chief Minister Manohar Lal Khattar had on Wednesday reiterated his appeal to migrant workers not to leave the state and instead start working in manufacturing units which have been allowed to resume operations, saying the coronavirus situation in the state was much better.

He had said migrants must compare the situation in their native places with that in Haryana before taking a decision.

The chief minister, however, had said if anyone still wanted to leave, the state government has already made arrangements for their return as per the Centre's guidelines.

On Wednesday, the first special train from Hisar carrying 1,200 migrant workers left for Katihar in Bihar.

More such migrants wanting to go back will be sent back within the next seven days through 5,000 buses and 100 trains, with the state government being ready to bear the entire cost of their transportation.

As many as 23,452 migrant labourers have so far been sent to their home states free of cost by various trains and buses arranged by the state government during the past three days, a statement had said here on Friday.

Meanwhile, Mr Vij said 66 persons from Haryana were among the stranded Indians, who were brought back home on Friday as part of the Centre's mega repatriation mission Vande Bharat.

"As many as 66 persons from Haryana returned from abroad and they have been quarantined in a facility in Gurgaon," he said.