Babita Phogat wants to encourage women to take up sports and address the issue of declining child sex ratio in the state. 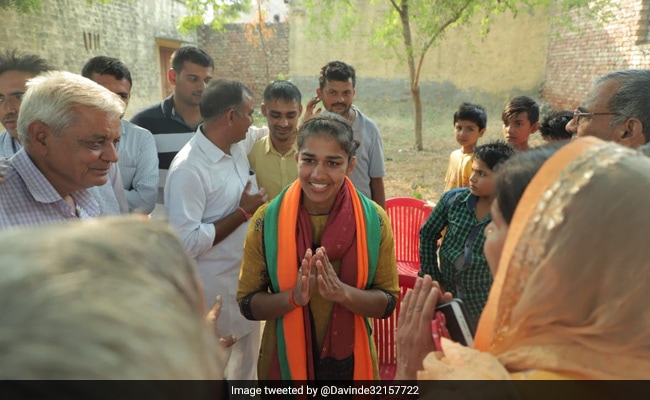 Two-time Commonwealth Games' gold medalist Babita Phogat, who is making her election debut with a BJP ticket from Haryana's Charkhi Dadri, aims to promote sports among women of her state.

She plans to rechristen Prime Minister Narendra Modi's flagship "Beti Bachao, Beti Padhao" programme by incorporating "Beti Khilao" in it to encourage women to take up sports and to address the issue of declining child sex ratio.

Her opponents in this state election are seasoned politicians belonging to the Jat community.

According to election records, no candidate has ever won the seat for two consecutive terms, each time the competition being too close.

In the last four assembly elections, the margin of votes of the winner has been less than 2,000.

"When you are representing a country in international competition, the country's prestige is at stake. In the political battleground, too, it is the prestige of the party that is at stake," she told IANS.

"For me highlighting the achievements of the BJP governments, both in the Centre and state, is my top priority.

"In my priorities, the focus will be on strengthening infrastructure, basic amenities, healthcare for all and transparency in local administration, besides sports", she added.

Being a sportsperson, Babita Phogat said if voted to power, she would champion the "Beti Bachao, Beti Padhao, Beti Khilao" (Save the daughter, educate the daughter and promote sports for the daughter) programme among the girls of her state. She does not believe in gunning her political rivals. "When you have achievements, propagate them publicly," she said.

Praising the government decision to scrap the provisions of Article 370, she is telling voters that "it's a historic decision".

While speaking to her constituency about the local issues, Ms Phogat stresses on the fact that the state BJP government brought "people closer to the administration by carving out a new district Charkhi Dadri from Bhiwani."

"Now, you can get your administrative work done at your doorsteps," she said at a corner meeting over a cup of tea in a village just on the outskirts of Charkhi Dadri town.

When asked if politics is a new battleground for her, she says, "No, politics is not new for my family. My mother was a sarpanch (village head) for a long time."

The Prime Minister at a public rally in Charkhi Dadri on Monday said he "felt really proud of Haryana" when the Chinese President Xi Jinping, during his recent India visit, told him that he had watched Aamir Khan-starrer "Dangal" which was based on the achievements of the Phogat sisters.

"We feel elated when Prime Minister Modi praises our daughter (Babita Phogat) from the stage. We are sure she will get a berth in the state cabinet if she gets elected," said a middle-aged woman Radha Sangwan.

In the 2014 state election, BJP candidate Somvir Sangwan had lost to INLD's Rajdeep Phogat by a thin margin of 1,610 votes.

Ms Phogat's father Mahavir Singh Phogat, who later joined the JJP, is not contesting this election. He is however, campaigning for his party's candidate.

The total electorates in the Jat-dominated Charkhi Dadri assembly constituency are 193,882, including 89,213 women.

Haryana will go to polls in a single phase for 90 assembly seats on October 21. The counting of ballots will be held on October 24.