Haryana Elections 2019: Babita Phogat is pitted against seasoned politicians like Satpal Sangwan of the Jannayak Janta Party (JJP) and Nirpender Singh Sangwan of the Congress. Both have won this seat earlier - by margins of less than 2,000 votes. 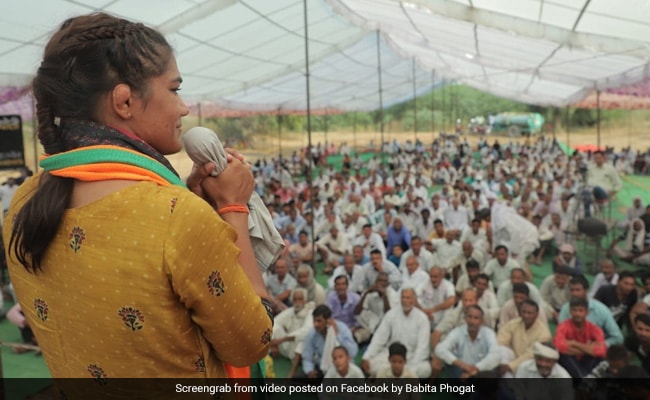 Wrestler Babita Phogat's entry into the political "dangal'' has spiced up the contest for the Dadri assembly seat, where no party has won consecutive terms in the past four elections.

The 29-year-old BJP candidate is pitted against seasoned politicians like Satpal Sangwan of the Jannayak Janta Party (JJP) and Nirpender Singh Sangwan of the Congress. Both have won this seat earlier - by margins of less than 2,000 votes.

She became a household name after ''Dangal'' - a film about the struggle of her father and noted wrestling coach Mahavir Singh Phogat to train her and her sister Geeta - became a runaway hit.

As the Commonwealth Games medallist hits the campaign trail, she is received by a group of elders in one of the villages.

"Every time I returned home with a medal, I got so much love and respect here, and this motivated and inspired me to go for the next event with even more determination," she says.

"Now, when I have entered the political dangal, I need the same love and support," she tells the gathering.

In Akhtiyarpura village, Ms Phogat is warmly received by a group of women, many among them elderly, with garlands and warm hugs.

She may be a greenhorn in politics, but Ms Phogat says politics has been part of her family. Her mother and an uncle have served as village heads.

"Politics is a platform to serve people. When I am among people, I don''t feel as if I am doing anything new. If you work hard and with honesty, people will support you," she tells PTI.

"Everyone here treats me like their own daughter and I am overwhelmed," she adds.

Ms Phogat is among the three sportspersons fielded by BJP in the upcoming polls - the other two are wrestler Yogeshwar Dutt (Baroda in Sonipat) and former hockey captain Sandeep Singh (Pehowa in Kurukshetra).

The Arjuna awardee says like in sports, she will make a mark in politics too and motivate women to take the plunge in this field.

"Women, sportspersons and the youth will be my priority, and for them I will keep doing something or the other," she says.

She says she was inspired by him to join the party. The BJP's ideology and "bold decisions" like scrapping Jammu and Kashmir's special status under Article 370 impressed her, she adds.

PM Modi is likely to address a poll rally in Dadri on Tuesday.

Dangal's "Bapu sehat ke Liye tu to haanikaarak hai" (Father, you are bad for the health) may have become a hit song, but Ms Phogat cannot forget the hard work the coach put in to train his daughters.

"My father had to leave two jobs to spend time with us at the akhara'', which he opened in our home. "He gave us full independence to do what was right and supported us all through," she says.

The family's village is Balali, 15 km from Dadri, which is about 300 km from state capital Chandigarh.

Seventeen candidates are in the contest for the Dadri assembly seat. Charkhi Dadri was made the state's 22nd district by the current M L Khattar government.

Among Phogat's challenger is Sombir, who lost by a small margin last time. He is fighting now as an independent after the BJP ticket he thought he deserved went to Ms Phogat.

Another rival Satpal Sangwan too switched parties recently, joining the JJP after being denied the Dadri ticket by the Congress.

Even the sitting MLA, Rajdeep Phogat, has changed sides. He was elected on an Indian National Lok Dal ticket but shifted to the breakaway JJP last year.