Haryana Chief Minister ML Khattar urged the Union minister to allow pollution controls to be district-specified rather than entire NCR-specified. 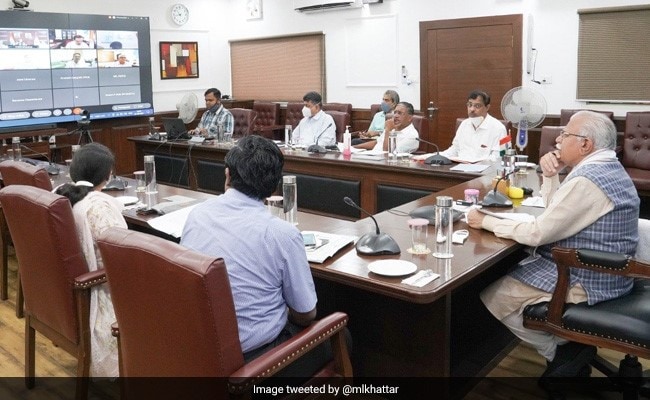 The Haryana government was lauded for stubble management at the pollution control meeting.

Haryana Chief Minister ML Khattar on Thursday said pollution control provisions should be either implemented only within a 10 km radius of Delhi's National Capital Territory (NCT) or any National Capital Region (NCR) city with a population of 10 lakh.

Mr Khattar said the implementation of these provisions can also be district-specific.

He was speaking at an online meeting chaired by Union Environment Minister Bhupender Yadav to discuss the implementation of an action plan to improve air quality in NCR ahead of winter, a Haryana government statement said.

The statement, however, did not specify which particular provisions the chief minister was referring to.

An official said Mr Khattar was referring to the pollution control provisions related to industries. Thirteen districts of Haryana fall under the NCR region.

Mr Yadav said the Haryana government has done remarkable work in the field of stubble management as a result of which there has been a decline in the number of stubble burning incidences in the state.

Stubble burning is one of the major reasons behind high levels of air pollution in the capital in October-November, and the Arvind Kejriwal-led Delhi government has been pressing the Centre to direct states to use Pusa bio-decomposer, a microbial solution to turn stubble into manure, in states surrounding the capital.

Mr Khattar urged the Union minister to allow the implementation of pollution control provisions "as district-specified rather than entire NCR-specified," saying sometimes difficulties are faced while implementing them.

"At present around 47 percent area of Haryana comes under the NCR region. Therefore it is urged that all such provisions should be implemented within the radius of 10 km of NCT and Delhi or within the 10 km radius of cities having 10 lakh population, or these provisions should be implemented as per district-specified, not as NCR," said Mr Khattar.

Mr Khattar said Haryana is geared up to handle stubble burning issue ahead of the winter season in the state.

The meeting was attended by ministers and senior officials of various departments from Delhi, Punjab, Rajasthan and Uttar Pradesh, a Haryana government release said.

Lauding the dedicated steps taken by Haryana for improving air quality, Mr Yadav said that the state government's decision to use "bio-decomposer technology on one lakh acres of land area is certainly a pivotal step for stubble burning management".

"The Haryana government has done remarkable work in the field of stubble management as a result of which decline has been seen in the number of stubble burning incidences in the state," said Mr Yadav addressing the high-level meeting.

Urging Mr Yadav to expedite the work of laying Compressed Natural Gas (CNG) and Piped Natural Gas (PNG) pipelines in the pending areas of the state, the Haryana Chief Minister said because of the non-availability of these pipelines many industries were facing difficulties.

Switching the industrial units to CNG and PNG has already been done in a phased manner at the places where the pipelines are available, informed Mr Khattar.

Mr Khattar said the total area under paddy in Haryana is 34.10 lakh acres. The area has been reduced up to 10.7 percent in comparison to the previous year with the efforts of the state government, he said.

In a bid to ensure efficient management of stubble burning, the villages of the state have been categorized into 'Red, Yellow and Green Zones' in terms of incidences of crop residue burning, says the data provided by the Haryana Space Applications Centre (HARSAC) to the Agriculture and Farmers' Welfare Department.

A detailed action plan has been prepared for the prevention of crop residue burning in the current season, and the same has been discussed at length with the Commission for Air Quality Management (CAQM) in NCR and adjoining areas, he said.