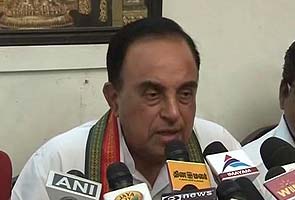 New Delhi: Harvard University has decided to remove the summer courses on economics taught by Janata Party leader Subramanian Swamy after a furious debate over a controversial editorial written by him that was offensive to Muslims.

The university has termed his views, expressed in a Mumbai newspaper in July, as "reprehensible".

At a meeting of Harvard's Faculty of Arts and Sciences, faculty members voted with an "overwhelming majority" to remove two economics courses - 'Quantitative Methods in Economics and Business' and 'Economic Development in India and East Asia' - that Mr Swamy teaches at the three-month Harvard Summer School session.

According to a report in the Harvard Crimson, the faculty meeting resulted in a "heated debate" when Comparative Religion Professor Diana Eck proposed an amendment to exclude Mr Swamy's courses from the catalogue.

The Professor said that that Harvard had a moral responsibility not to affiliate itself with anyone who expresses hatred towards a minority group.

"There is a distinction between unpopular and unwelcome political views," the professor was quoted as saying.

But Mr Swamy said that "a dangerous precedent has been enacted".  "If there was an objection they (the university authorities) should have written to me," he said.

After Mr Swamy's controversial piece appeared, a group of Harvard students known as 'Coalition Against Bigotry at Harvard' had started a petition drive calling on the University to severe ties with him.

The university had initially decided to stand by Mr Swamy, citing principles of free speech.

Philosophy Department Chair Sean Kelly had defended the unanimous decision of Harvard's Faculty Council to keep Mr Swamy on the teaching roster as an effort to preserve free speech at the school. Mr Kelly ultimately voted for the amendment to remove Mr Swamy's courses.

"I was persuaded ... that the views expressed in Dr Swamy's op-ed piece amounted to incitement of violence instead of protected political speech," he said.

Dean of Summer School Donald Pfister said that the courses included in the catalogue are chosen by individual departments.

"I find (Mr Swamy's) position reprehensible, but on the other hand, it is our duty to support departments and their offerings," he said.

Faculty members said that Mr Swamy's article was not a product of free speech but of hate speech.

"(Mr Swamy's position on disenfranchisement) is like saying Jewish Americans and African Americans should not be allowed to vote unless they acknowledge the supremacy of white Anglo Saxon Protestants," said History Professor Sugata Bose.

The Janata Party leader had received his PhD in Economics from Harvard in 1965 and has served as an assistant and associate professor.

Promoted
Listen to the latest songs, only on JioSaavn.com
Division of Continuing Education spokesperson Linda Cross had called the article "distressing" but had said "it is central to the mission of a university to protect free speech, including that of Dr Swamy and of those who disagree with him."