Uttarakhand's Joshimath municipality has also slapped a fine of Rs 2.5 lakh on Gupta brothers for scattering garbage and defecating in open in the picturesque mountain resort where the weddings were held last week. 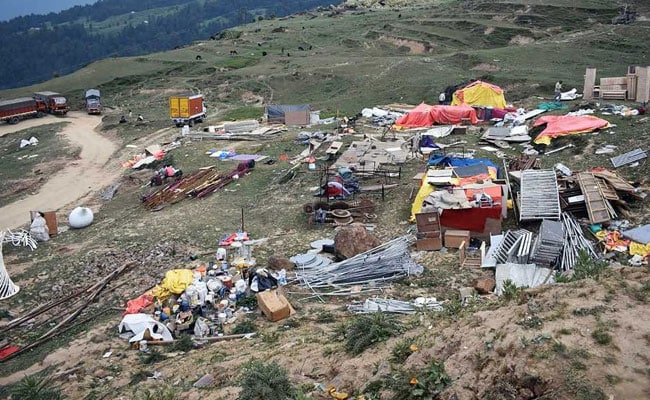 The ski resort of Auli in Uttarakhand, the scene of the high profile weddings of two sons of South Africa-based businessmen Gupta brothers, has been cleaned, top officials of the Joshimath municipality said on Sunday.

"Auli is totally clean now. We have picked up all the garbage and cleaned all the pit sewage," said S.P. Nautiyal, the Executive Officer of the Joshimath Municipality. The official had last week asserted that Auli will be cleaned by June 30.

The municipality has also slapped a fine of Rs 2.5 lakh on Gupta brothers for scattering garbage and defecating in open in the picturesque mountain resort where the weddings were held last week.

Rs 1 lakh was slapped for defecating in open, and Rs 1.5 lakh is the penalty for scattering garbage, Nautiyal said. A copy of the chalan has already been sent to the event management company which made arrangements for the weddings, Nautiyal said.

In addition to this, the municipality has also prepared a bill of Rs 8.14 lakh for collecting the garbage left as environmentalists raised concerns. Already, Gupta brothers have deposited Rs 5.54 lakh with the municipality which also includes Rs 54,000 as user charges.

The Gupta brothers have assured the municipality officials that they would pay all the bills and fines shortly.

Following the Gupta weddings, the Joshimath municipality collected a total of 321 quintal of garbage from the site.

Meanwhile, the issue of the refund of the Rs 3 crore security deposited by the Gupta brothers with the Chamoli district administration in Uttarakhand will be decided on July 8, the next day of the hearing in the Nainital High Court.

Under the strict orders of the Nainital High Court, a group of 13 officials had monitored the functions and also videographed the main events at Auli.

All the 13 officials are from different government departments which include forests, state pollution control board, Chamoli district administration, Uttarakhand Jal Sansthan, Revenue, PWD and others.

Helicopters were not allowed to land at Auli completely. Instead, the choppers carrying guests landed at Ravigram near Joshimath helipad from where they were taken to the marriage site by cars.

As per the High Court's orders, only 150 guests were allowed in the function. Chief Minister Trivendra Singh Rawat, Baba Ramdev were among the VIPs who also blessed the newly-weds.

A bevy of Bollywood stars including actress Katrina Kaif also performed in the wedding.

Chief Minister Rawat had strongly defended the marriage saying environmental concerns were not justifiable and Auli can be developed as a big tourist destination.