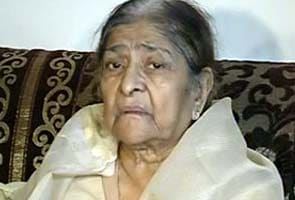 New Delhi: In a relief to Gujarat riots victim Zakia Jafri, the Supreme Court today allowed her to file protest petition against the closure report of the Special Investigating Team (SIT), which investigated Chief Minister Narendra Modi's role in the 2002 riots.

The top court set aside the magistrate court order which disallowed Ms Jafri to file the protest petition saying she had failed to do so despite repeated extensions being granted. It also directed the SIT to hand over copies of its reports.

Ms Jafri, widow of Eshan Jafri who was burnt alive in the 2002 Gujarat riots, had approached the Supreme Court challenging the magistrate's order. She also wanted the copies of reports submitted by the SIT to the Supreme Court.

Gujarat government opposed this but the Supreme Court overruled the objection after Amicus Curiae Raju Ramachandran supported Ms Jafri's stand. The court has said that she can file the protest petition within eight weeks of receiving the SIT report.

Promoted
Listen to the latest songs, only on JioSaavn.com
Ms Jafri's case relates to the killing of her husband and 68 people on February 28, 2002 at the Gulberg Housing Society in Ahmedabad where the Jafris lived. Ms Jafri alleges that Mr Modi and several senior ministers and officials did nothing to prevent the killings, despite several frantic calls made by Mr Jafri to the police and even to the Chief Minister's office, for help as a mob attacked the housing complex.

The Supreme Court had set up the SIT to look into Ms Jafri's case and other cases. In February this year, the SIT gave a clean chit to Mr Modi, saying it has found no evidence against him and 61 other accused in the case. The SIT filed a closure report on which the Ahmedabad court has been conducting a hearing.