Gujarat Bypolls Results: Earlier this year Gujarat Congress plunged into disarray with Alpesh Thakor's switch to the BJP. Mr Thakor had been credited for the party's impressive performance in the 2017 state elections 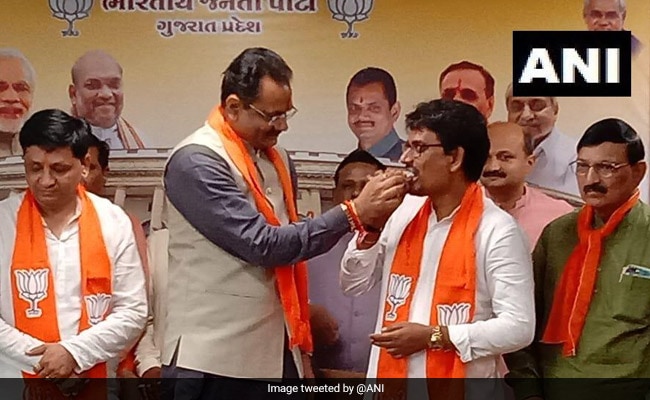 The Congress and the BJP are neck and neck in bypolls to six Assembly seats in Gujarat, with the ruling BJP winning the Kheralu seat and leading in Amraiwadi and Lunawada and the opposition registering wins in Tharad, Bayad and Radhanpur constituencies. The fight for Radhanpur was closely watched given the BJP opted to field former Congress MLA Alpesh Thakor from this seat. Mr Thakor, 43, joined the BJP in July. He was joined in switching sides by party colleague Dhavalsinh Zala, who was fielded from Bayad.

According to data from the Election Commission of India's website, Mr Thakor lost to Congress's Desai Merajbhai by nearly 3,807 votes. Mr Zala lost the Bayad seat to the Congress' Patel Shivabhai by 743 votes. The Congress also won from Tharad, with Rajput Gulabsinh Pirabhai beating Patel Jivrajbhai Jagtabhai by 6,372 seats. The BJP's Ajmalji Thakor beat Thakor Babuji Ujamji of the Congress to the Kheralu seat by a massive 29,091 seats.

Bypolls for the Radhanpur and Bayad seats were necessitated by the resignations of Mr Thakor and Mr Zala. The other four seats, all of which are held by the BJP, fell vacant after the MLAs were elected to the parliament in Lok Sabha polls in April-May.

The strong showing of the Congress will come as good news to a party that has struggled for relevance across the country following its disastrous performance in national elections earlier this year.

Earlier this year Gujarat Congress plunged into disarray with Alpesh Thakor's switch to the BJP. Mr Thakor had been credited for the party's impressive performance in the 2017 state elections. However, after a fallout with the party's leadership he resigned from all Congress posts before the Lok Sabha elections.

Mr Thakor criticised his former party and said that the people of his community were "sidelined" and this is why he quit. "I will not sit quiet or continue as an MLA if my people get nothing," Mr Thakor said, adding that "weak leaders" were at the helm of Congress affairs in the state.

After the comments, the BJP extended an invite to him. He had however said that he was not planning to join the ruling party. He then formally joined the BJP a few months later.

Polling for the bypolls in Gujarat, as well as those in other seats across the country and full Assembly elections in Maharashtra and Haryana, were held on October 21. A total of 53.68 per cent voter turnout was recorded in Gujarat, with the highest - 68.95 per cent - recorded in Tharad and the lowest - 34.75 per cent - in Amraiwadi.