Leaders of other coalition partners, including Chief Minister Nitish Kumar's JD(U), Congress, CPI(ML)-L, CPI(M) and CPI, were also present at the conference. 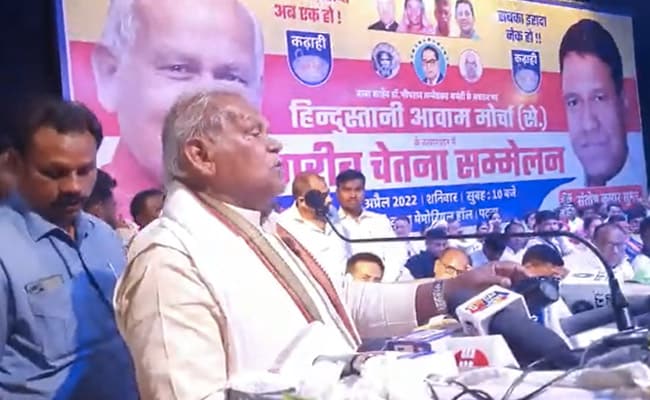 Mr Manjhi also disclosed the names of respective candidates for the seats. (File)

The ruling 'Mahagathbandhan' in Bihar today announced that the RJD, its largest constituent, will field candidates for by-elections to both Mokama and Gopalganj assembly seats.

The announcement was made by former chief minister Jitan Ram Manhi, whose outfit Hindustani Awam Morcha is a minor constituent of the seven-party ruling coalition, at a press meet held at the state RJD headquarters.

Leaders of other coalition partners, including Chief Minister Nitish Kumar's JD(U), Congress, CPI(ML)-L, CPI(M) and CPI, were also present at the conference.

They claimed that the 'Mahagathbandhan' will trounce the BJP in both the seats.

Mr Manjhi also disclosed the names of respective candidates for the seats, where the BJP had announced its nominees a couple of days ago.

For the keenly watched Mokama, the RJD candidate will be Neelam Devi, wife of four-term-MLA Anant Kumar Singh whose disqualification upon conviction in cases related to recovery of arms and explosives from his residence have necessitated the by-poll.

The party ticket for Neelam Devi, who had made an unsuccessful debut as a Congress candidate from Munger in 2019 Lok Sabha polls, was being seen as a done deal following her recent meeting with Deputy CM Tejashwi Yadav, the RJD heir apparent.

She will seek to retain the seat by surmounting the challenge posed by BJP, which is contesting Mokama after nearly three decades, and has placed its bets on Sonam Devi, whose husband is a local muscleman belonging to the same Bhumihar caste as Anant Singh but a staunch opponent of the latter.

In Gopalganj, the RJD has sprung a surprise by fielding Mohan Prakash Gupta, an old party hand who belongs to the Vaishya community, members of which are largely seen as supporters of the BJP.

Mr Gupta's candidature seems to be in line with Tejashwi Yadav's assertion that the RJD was a party that cared for "A to Z" and not just "MY", an abbreviation for the Muslim-Yadav combination.