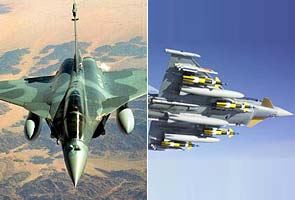 The Dassault and the Eurofighter, according to sources, are the only participants asked to extend the validity of their commercial bids and have been called to the Defence Ministry on Thursday, the sources add.

Promoted
Listen to the latest songs, only on JioSaavn.com
Sources also say that the other competitors - Boeing F/A-18, Lockheed-Martin's F-16, UAC's MiG-35 and Saab's Gripen - haven't received a message or a letter.