Government's Nod To Rs 6,809 Crore Tunnel That Will Connect Leh All Year

Zojila pass is situated at an altitude of 11,578 feet on Srinagar-Kargil-Leh National Highway which remains closed during winters (December to April) due to heavy snowfall and avalanches cutting off Leh-Ladakh region from Kashmir. 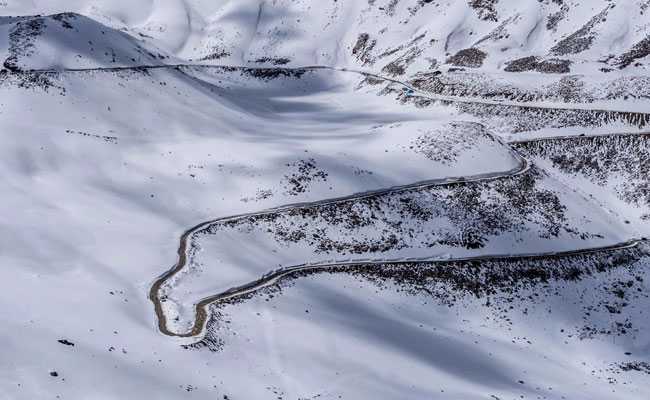 The construction period of the 14.15 km-long tunnel is seven years (File)

New Delhi: The government today approved the Rs 6,809-crore strategic Zojila pass tunnel project in Jammu and Kashmir to provide all-weather connectivity between Srinagar, Kargil and Leh, which remains cut-off from the rest of the world during winters due to heavy snowfall.

Zojila pass is situated at an altitude of 11,578 feet on Srinagar-Kargil-Leh National Highway which remains closed during winters (December to April) due to heavy snowfall and avalanches cutting off Leh-Ladakh region from Kashmir.

"The Cabinet Committee on Economic Affairs, chaired by Prime Minister Narendra Modi, has given its approval to the construction, operation and maintenance of 2-lane bi-directional Zojila Tunnel with Parallel Escape (Egress) Tunnel excluding approaches on Srinagar-Leh section connecting NH-1A at Km 95 and at Km 118 in Jammu and Kashmir on engineering, procurement and construction (EPC) mode," the Ministry of Road Transport and Highways said in a statement.

The statement said apart from providing all weather connectivity between Srinagar, Kargil and Leh, the project will bring about all round economic and socio-cultural integration of these regions.

"The project has strategic and socio-economic importance and shall be an instrument for the development of the economically backward districts in Jammu and Kashmir," it said.

The project aims at construction of 14.15 km-long two-lane bi-directional single tube tunnel with a parallel 14.2 km long egress tunnel excluding approaches between Baltal and Minamarg in the state.

The project will be implemented by the Ministry of Road Transport and Highways (MoRT&H) through the National Highways and Infrastructure Development Corporation Limited (NHIDCL).

The main objective of the project is to provide all whether connectivity to strategically important Leh region in Jammu and Kashmir which at the moment is limited to at best 6 months because of snow on the passes and threat of avalanches.

"This project along with other ongoing projects like 6.5 km long Z-Morh tunnel at Gagangir would ensure safe, fast and cheap connectivity between the two regions of Kashmir and Ladakh," the statement said.

It will further increase the employment potential for the local labourers for the project activities, it added.

The government said on completion, it will lead to enormous boost in employment as local businesses get linked to National market and the beautiful region is able to receive round the year tourist traffic.

IL&FS Transportation last year in July had said it has emerged as the lowest bidder for Rs 4,899 crore Zojila pass tunnel in Jammu and Kashmir.

"We wish to inform that the company has emerged as the lowest bidder for the aforesaid (Zojila tunnel) project. The company had quoted an amount of Rs 4,899.42 crore to be constructed in a period of 2,555 days (7 years)," IL&FS Transportation said.

Road Transport and Highways Minister Nitin Gadkari had earlier said, "We understand the plight of the people in Leh and Ladakh region who face severe crisis during winters when they are cut off from the rest of India for six months. We are committed to undertaking the project."

Promoted
Listen to the latest songs, only on JioSaavn.com
On March 1, 2016, the transport ministry had ordered "re-bidding" for the project, which had been awarded to IRB Infrastructure.

The decision was taken at a high-level meeting, chaired by Mr Gadkari, after Congress leader Digvijay Singh alleged that guidelines were violated while awarding the contract. The ministry, however, had denied the charges.