"Government Was Looking For Proof Of Life In A War-Torn Country": V K Singh

External Affairs Minister Sushma Swaraj today informed the parliament that the Indians abducted in Iraq in 2014 were killed by Islamic State terrorists and buried in a mass grave. 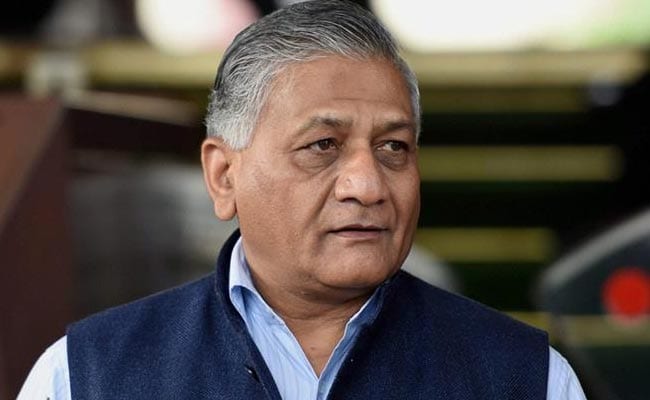 VK Singh said it was "always the easier choice" to have the Indians declared dead. (File photo)

New Delhi: Under fire from the opposition over the centre's handling of the abduction of 39 Indians by the ISIS in Iraq in 2014, Union minister V K Singh today said the government was looking for proof of life in a war-torn country and it was "always the easier choice" to have declared them dead.

External Affairs Minister Sushma Swaraj today informed the parliament that the Indians abducted in Iraq in 2014 were killed by Islamic State terrorists and buried in a mass grave, setting off a row with the opposition, which accused the centre of being insensitive for not informing the victims' families first.

Taking to Twitter, Singh, the minister of state for external affairs said, We are sorry that we lost them. But we do not regret trying".

Opposition parties, including the Congress and CPM, criticised the central government over the delay in announcing the death of the Indians which gave false hope to their families that they were alive.

"Yes, we did not (announce the deaths). Because we were not willing to give up on them. Now I understand why they (opposition) are outraged. Because we did not fall in line and did what they would have done.

"While we were looking for proof of life in a war-torn country, it was always the easier choice to declare them dead. But we owe it to their families and to the nation to have looked for them," Mr Singh said.

As many as 39 Indians were abducted by terrorist organisation ISIS in June, 2014 from Mosul in Iraq, but one of them escaped by posing as a Muslim from Bangladesh, Ms Swaraj told the Rajya Sabha.

"I had said that I will not declare anyone dead without substantive proof... today I have come to fulfil that commitment...I had said that closure will be done with full proof. And when we will, with a heavy heart, give the mortal remains to their kin, it will be a kind of closure," she said.

While it was not immediately known exactly when these 39 Indians were killed, their bodies were recovered from Badush - a village northwest of Mosul, and their identities established through DNA testing, she said.

Promoted
Listen to the latest songs, only on JioSaavn.com
Hitting out at the government over the issue, Congress MP Shashi Tharoor said, giving falsehood to people is actually cruel and suggests a certain level of lack of transparency on part of the government".

National Conference leader Omar Abdullah said it was unpardonable that families of victims had to learn about their heart-breaking loss from television channels instead of the government.