Pulwama terror attack: According to sources, Jaish-e-Mohammad had warned of a suicide strike in Kashmir just two days ago. 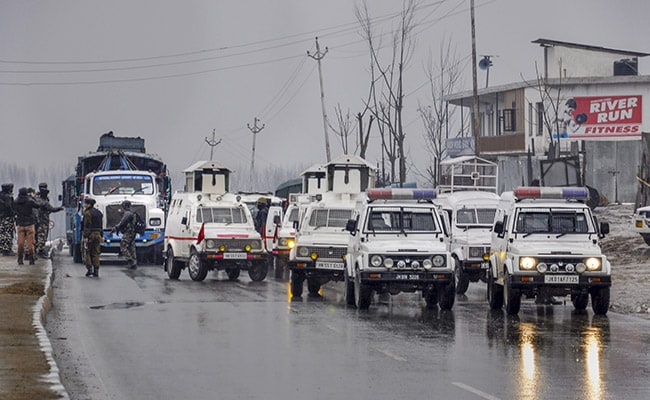 Pulwama terror attack: The Jaish-e-Mohammad had claimed responsibility for the attack.

While the government went into a huddle this morning to dissect the terror attack in Jammu and Kashmir's Pulwama that left more than 40 security personnel dead, the opposition blowback has already begun. From the two main parties in Jammu and Kashmir, both out of power because of Governor's rule in the state, to some Congress leaders, the government faced difficult questions on the security lapse.

"It's mind boggling that the biggest ever terrorist attack in J&K takes place & yet for some channels/talking heads the only people NOT accountable are the central government & the governor's administration (sic)," tweeted former Jammu and Kashmir Chief Minister and National Conference leader Omar Abdullah.

On Thursday, a terrorist of the Pakistan-based Jaish-e-Mohammad rammed an SUV loaded with 350 kg of explosives into a convoy of the Central Reserve Police Force (CRPF), triggering an explosion that was heard more than 10 km away. Over 2,500 troopers of the paramilitary force were in the convoy of 78 vehicles.

According to sources, the terror group had warned of a suicide attack in Kashmir just two days ago. Even the mode of attack was indicated by a video they had uploaded online, showing a strike in Afghanistan, where an explosive-laden vehicle used.

The opposition has questioned why such a large number of troops were being transported at the same time, why road wasn't guarded better and how the terrorist's vehicle managed to approach the security convoy. Others cornered the BJP government over its security record.

Escorting #MasoodAzhar out of Indian prison 2 #Afghanistan has cost India most dearly. If total deaths of innocents and brave jawans due to #Masoodmachinations were added up since last 19/20 years post his release, they Wld cross 200/250 if not more!

Governor of #J&K suggestion that there has been some laparwahi on behalf of the intelligence is a public statement now. Question is, in the #Governor's Rule, who is to be blamed? #Pulwama

Mr Singhvi's comments, however, stood at odds with Congress chief Rahul Gandhi who firmly declined questions on political controversies at a news briefing this morning, saying it was not the time or place.

"I will support the government and jawans in this difficult time... As far as I am concerned, there will be no other discussion," said Mr Gandhi.