Ace golfer Jyoti Singh Randhawa was arrested by forest authorities at the Dudhwa Tiger reserve in Uttar Pradesh, a senior officer at the reserve said

Jyoti Singh Randhawa was flanked by policemen as images after the arrest showed.

International golfer Jyoti Singh Randhawa has been arrested for alleged poaching in Uttar Pradesh's Bahraich. A .22 rifle has been seized from him after he was arrested by forest authorities at the Dudhwa Tiger reserve, a senior officer at the reserve said.

Images after the arrest showed the ace golfer flanked by policemen in front of an SUV. On a table are two rifles besides other gear.

"Jyoti Singh Randhawa and Mahesh Virajdar (who accompanied him) have been arrested in a poaching case in Motipur range of Katerniaghat," said Ramesh Pandey, field director at Dudhwa Tiger Reserve.

"A vehicle, weapon and other equipment along with wildlife articles have been seized," Mr Pandey said. "Interrogation and further legal action is being taken by the DFO (divisional forest officer) Katerniaghat and his team." 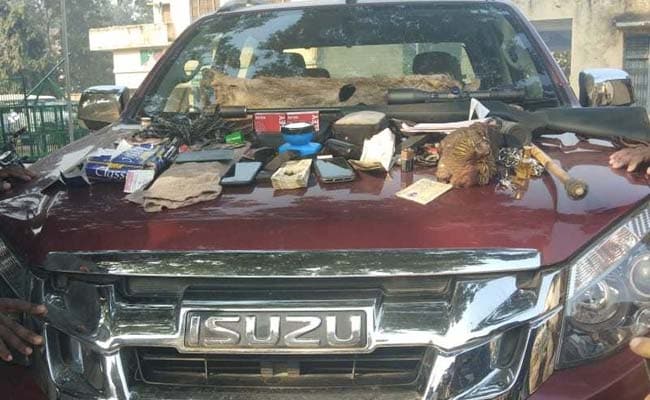 Some animal rights activists tweeted that Jyoti Randhawa had brought his hunting dogs during the search for tigress Avni that was shot dead in Maharashtra's Yavatmal forest on November 2.

Jyoti Randhawa is a professional golfer who ranked in the top 100 of the Official World Golf Ranking several times between 2004 and 2009. He has participated in the Asian tour and the European tour.