The Congress on Monday had dared the 63-year-old Chief Minister to hoist the national flag on the occasion of the state Liberation Day, a day after Manohar Parrikar on Sunday made his first public appearance. 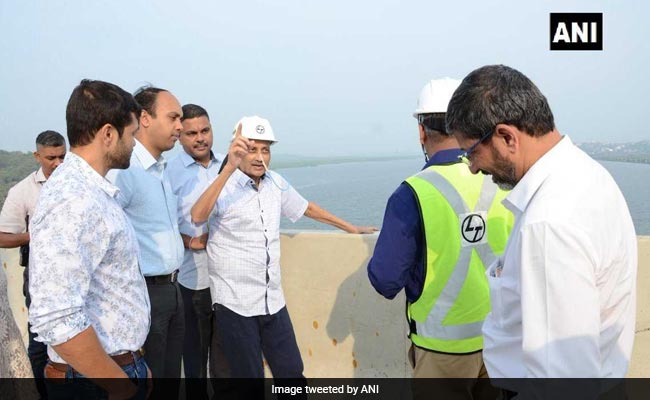 Manohar Parrikar inspected a bridge on Mandovi river in the coastal state.

Ailing Goa Chief Minister Manohar Parrikar is being projected as a 'He-Man or Superman' by the Bharatiya Janata Party (BJP) and made to pose in staged photo-shoots, the Congress said on Wednesday, chiding the former Defence Minister for skipping the 57th Goa Liberation Day Parade.

"The BJP is only indulging in staged photo sessions and they are projecting the CM of Goa as a 'He-Man or Superman'. Mr Parrikar had the time and fitness to inspect an under-construction bridge with doctors alongside him, but could not be present to hoist the tricolour on Goa Liberation Day. That is a really sad state of affairs," Congress spokesperson Urfan Mulla told reporters on Wednesday.

The Congress on Monday had dared the 63-year-old Chief Minister to hoist the national flag on the occasion of the state Liberation Day, a day after Mr Parrikar on Sunday made his first public appearance in nearly two months, when he, accompanied by a medical team, inspected an under-construction bridge near Panaji.

Mr Parrikar's public appearance on Sunday comes at a time when the Panaji Bench of the Bombay High Court is due to pronounce its order on a petition which seeks making the health status of the ailing Chief Minister public.

Mr Parrikar is suffering from advanced pancreatic cancer and has been in and out of hospitals in Goa, Mumbai, New York and Delhi for nearly nine months. The Opposition has demanded Mr Parrikar's resignation on account of his prolonged ill-health.

Earlier at the Liberation Day parade on Wednesday, Speaker of the Goa Legislative Assembly Pramod Sawant stood in for Mr Parrikar.

"Goa CM Manohar Parrikar could not attend the assembly because of health issues. Therefore I am reading his speech in his absence," Mr Sawant said.

The Speaker also extolled freedom fighters who had to struggle and, in some cases, pay with their life for liberating Goa from the Portuguese. He also expressed his indebtedness to the Indian armed forces for liberating Goa.

"Indian freedom struggle was incomplete until Goa was eventually freed from 450 years of oppressive Portuguese rule. Portugal used religion to divide and rule to retain power in Goa," Mr Sawant said, while extolling the achievements of the state in the fields of health, education, infrastructure, since liberation.