He said the collectors should particularly understand the conditions related to health services in remote parts of the districts, according to a statement issued by the PMO. 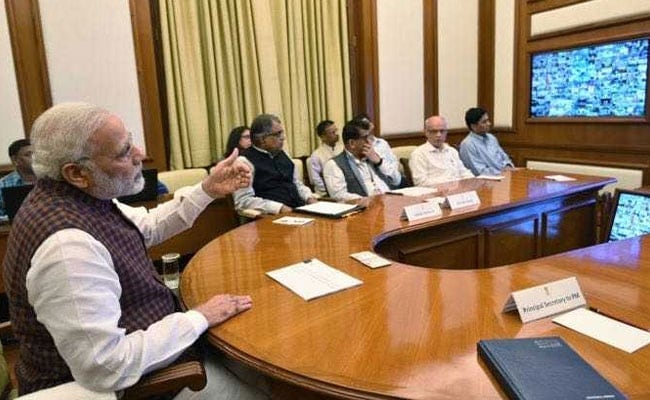 Move beyond files and go to the field to understand ground realities, PM told collectors

New Delhi: Move beyond files and go to the field to understand ground realities. This was the message of Prime Minister Narendra Modi to the district collectors of the country during his first-of-its-kind interaction with them via video conference.

He said the collectors should particularly understand the conditions related to health services in remote parts of the districts, according to a statement issued by the PMO.

During the interaction under the theme 'New India Manthan, he said the more a collector visits the field, the more active he will be on files.

The prime minister said collectors must also make people aware about the benefit of initiatives such as LED bulbs, BHIM App etc as many times, schemes fail to have the desired impact, just because people are not aware about them.

Similarly, the Swachh Bharat Abhiyan is dependent upon a responsive administration and awareness among people, he said, while emphasising that the real change in this regard can only come through public participation.

Referring to GST, the prime minister asked collectors to explain to traders in their districts how it is a "Good and Simple Tax."

He asked them to ensure that each trader is registered under GST.

He also asked them to avail of Government e-marketplace for all procurement in their district.

He asked the collectors to listen carefully to the poor, who approach them with their grievances, the statement said.

Noting that district collectors are young and capable, he said they could make resolutions for 'New India of 2022' in respect of their districts.

He expressed confidence that their resolutions would be achieved, and in the process, the country too, would reach new heights of achievement.

The prime minister compared the development work in a district to a relay race.

Just as the baton is passed on from one athlete to the next in a relay race, with the ultimate objective of winning the race, similarly, the development baton passes on successively from one collector to the next, he said.

He said that as representatives of their districts, collectors now have to decide where they want to see their districts in 2022, what deficiencies must be overcome, and what services must be ensured.

The prime minister said the government is asking each individual, each family, each organization to aim for certain goals which they should accomplish by 2022, the PMO said.

He noted that some districts have always lagged in basic services such as electricity, water, education and health.

He said that when the socio-economic conditions improve in the 100 most backward districts, it would give a big boost to the overall development parameters of the country.

This puts an onus on the collectors of these districts to work in a mission mode, PM Modi said.

The prime minister encouraged replication, and scaling up of best practices from districts where good results are being achieved in a particular field or scheme.

He asked the collectors to seek help from colleagues, intellectuals of the district, and students of schools and colleges, to prepare a vision document, or resolution document for their district before August 15.

This 'resolution document' should include those 10 or 15 objectives which they feel should be achieved by 2022.

The prime minister informed the collectors about the website www.newindia.in - which contains information and activities related to the 'Sankalp Se Sidhhi' (achievement through resolve) movement.

He said that just as he was doing this 'manthan' with the collectors, they can do the same in the districts.

He mentioned the important features about the 'New India' website, such as an online quiz on the freedom struggle, and a comprehensive calendar on various events being held as a part of the 'Sankalp Se Sidhhi' movement.
Comments
PM Modidistrict collectorsModi interacts with collectors