Girl, 9, Dies As Father Allegedly Made To Wait In Queue At AIIMS In Patna

Rambalak, a daily wager, brought her to the hospital in critical condition, instead of providing immediate help, he was allegedly made to wait in a queue to get the Outpatient department (OPD) registration card. 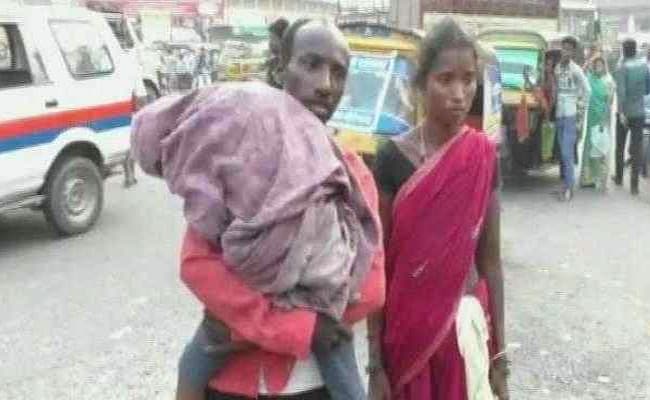 Rambalak carried his daughter's body on his shoulder for nearly four kilometre to an autorickshaw stand.

Patna: A nine-year-old girl who had been suffering from high fever for the last six days died at the All India Institute of Medical Sciences (AIIMS) in Patna after she was allegedly denied timely treatment. Her father was also forced to carry her body on his shoulder as he was reportedly refused a hearse van by the hospital authorities.

On Tuesday, when Rambalak, a daily wager, brought her to the hospital in critical condition, instead of providing immediate help, he was allegedly made to wait in a queue to get the Outpatient department (OPD) registration card, which he was told was necessary to begin her treatment.

Rambalak and his wife had travelled about 140 km from Kajra village to reach the hospital for their daughter's treatment. He pleaded with others in the queue to let him get the formalities done, but in vain. The girl's condition deteriorated and she died near the OPD registration counter before the doctors could see her.

"By the time Rambalak left the counter after getting the registration done, his daughter had died," a staff of a private agency contracted for cleaning operations at the hospital told news agency IANS.

His nightmare didn't end there. He was allegedly denied an ambulance by AIIMS officials to carry her body home. With the little money that he had, it was impossible to call a private vehicle. So he carried his daughter's body on his shoulder for nearly four kilometre to an autorickshaw stand in Phulwari Sharif.

AIIMS Director Dr Prabhat Kumar Singh, however, said he had no information that a critical patient had died due to lack of treatment.

"As far as a 'parcha' (registration card) is concerned, doctors treat critical patients without it and later their registration is done. But I will inquire into this case if it has happened," he said.

Rashtriya Janata Dal (RJD) chief Lalu Yadav attacked the Nitish Kumar government in the state for the "apathy shown towards the poorest of the poor". He has demanded a high-level probe into her death.

"Everything has collapsed in Bihar, including law and order, education, and health. The latest incident of the girl's death at Patna AIIMS vindicates our stand. There is no facility for the poor for treatment -- they have been left to die, as happened in this case."

He also took a dig at Union Minister of State for Health Ashwini Kumar Choubey, who just a few days ago had reportedly suggested that patients from Bihar should be treated at Patna's AIIMS and not in AIIMS at Delhi.

Promoted
Listen to the latest songs, only on JioSaavn.com
Mr Choubey's alleged remark about Biharis "crowding" AIIMS in Delhi even for minor ailments had drawn criticism from opposition parties.

Clarify On Reports Of Dossiers On MLAs: Congress Leader To Amarinder Singh