Ghulam Nabi Azad has sought a nod from the top court to visit his family members and relatives. 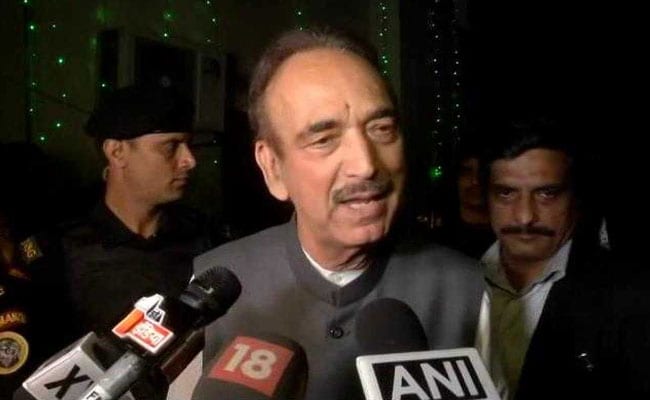 Senior Congress leader and former Jammu and Kashmir chief minister Ghulam Nabi Azad has moved the Supreme Court seeking permission to visit his home state to enquire about the well being of his family members.

His plea is scheduled to be taken up by a bench of Chief Justice Ranjan Gogoi and Justices S A Bobde and S Abdul Nazeer on Monday.

Mr Azad has sought a nod from the top court to visit his family members and relatives. He had tried to visit the state after the scrapping of Jammu and Kashmir's special status but was sent back from the airport by authorities.

In his petition before the top court, he has also sought permission to check on social conditions in the state after the clampdown imposed by the authorities in the aftermath of revocation of provisions of Article 370.

Several opposition leaders, including Congress leader Rahul Gandhi, had sought to visit Jammu and Kashmir, but were not allowed to do so and were sent back from the airport itself.

CPI(M) leader Sitaram Yechury had moved the top court to see his ailing party colleague Mohammed Yousuf Tarigami, which allowed him to pay a visit but with certain conditions.

The top court had on September 5, allowed former Jammu and Kashmir chief minister Mehbooba Mufti's daughter Iltija to meet her in Kashmir, where she is under detention following the revocation of the state's special status.

The top court had allowed Iltija to meet her mother in private but said that as far as moving around in other parts of Srinagar goes, she can do so subject to the permission from district authorities.