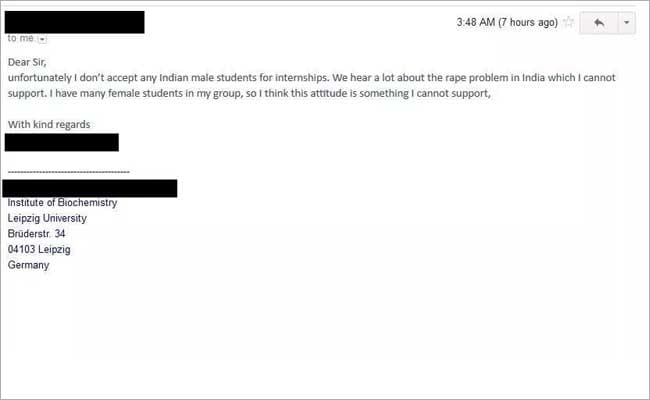 A German professor has apologised after a series of emails widely circulated online revealed that she had denied an Indian student an internship spot giving the "rape problem in India" as a reason.

An email thread reproduced on Quora showed that Annette Beck Sickinger of Leipzig University denied the student an internship at the Institute of Biochemistry.

The student protested that it is "generalisation," to which the professor responded: "I fully agree that this is a generalisation and may not apply to individuals. However, it is also unbelievable that the Indian society is not able to solve this problem for many years now."

Amid a wave of anger, the German Ambassador to India, Michael Steiner, objected strongly to the exchange, after which the professor apologised.

"I made a mistake. I never had the intention of discriminating against Indian society. I have nothing at all against students from India - quite to the contrary. If I hurt anybody's feelings, I duly and heartily apologize and feel sorry for any misunderstandings," Professor Sickinger said in a statement uploaded on the German embassy website.

The German envoy tweeted out his letter to the professor.

"It has been brought to my attention that you denied an internship to a male Indian student, giving 'the rape problem in India' as a reason. Let me make it clear at the outset that I strongly object to this," Ambassador Steiner said.

My answer to an unfair judgement: http://t.co/jUs7otE135pic.twitter.com/4Ns2hB5p8U

Promoted
Listen to the latest songs, only on JioSaavn.com
He called the "oversimplifying and discriminating generalisation" as an offense to millions of law-abiding, tolerant, open-minded and hard-working Indians.

The incident comes in the middle of a debate over a government order to ban the broadcast of a documentary on the 2012 gang-rape of a young student in Delhi.