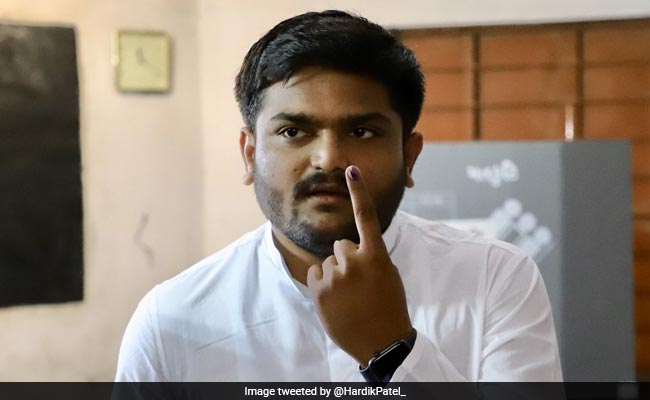 "I don't want a chowkidar, I want a Prime Minister. If I want a watchman I will go to Nepal," he said after voting in Viramgam in Gujarat in the third round of national elections.

"I want a Prime Minister who can strengthen the economy, youth, education and our jawans," Hardik Patel added.

The racist reference to the neighbouring country drew sharp reactions on social media.

Hardik Patel, a fiery Patidar campaigner, joined the Congress in March. However, he has been barred from contesting in the 2019 Lok Sabha polls by the courts because of his conviction in the 2015 Mehsana riots case.

He had earlier expressed a desire to contest from the Jamnagar seat in Gujarat.

Hardik Patel rose to prominence after starting a quota stir in Gujarat in 2015 and leading the Patidars against the state's BJP government. The fallout of that stir favoured the Congress - the party gained 15 seats from the Saurashtra region in the 2017 assembly polls.

The Patidar community accounts for 21 per cent of the vote share in the state and the Congress and the BJP have tried to woo them by giving eight and six tickets, respectively, to their candidates.

BJP has dismissed the possibility that Patel's agitation from four years ago will have a serious impact on its fortunes in the 2019 Lok Sabha elections.

Hardik Patel has also alleged the BJP is unsettled by his popularity.

Speaking to NDTV while on the campaign trail, he said, "They are scared of a 25-year-old, otherwise why would they keep targeting me? When I started to speak, some goons of the BJP came and started creating trouble".

Last Friday, at an election rally in Surendranagar, a man slapped Hardik Patel while he was speaking on stage.

Gujarat has 26 Lok Sabha seats, all of which are voting today. In addition to Hardik Patel, PM Modi and BJP president Amit Shah are some of the other high-profile politicians who cast their votes today.