Gay sex verdict: it's all up to the next government, say sources 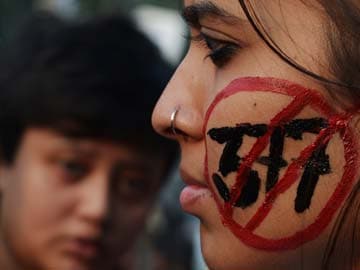 Members of the LGBT community protest against Section 377 of the Indian Penal Code. (AFP photo)

New Delhi: Days after the Supreme Court refused to review its controversial order that made gay sex criminal, the Centre has all but given up on any move to challenge the decision.

Sources say the government has been unable to work out either of its two options: filing a curative petition in the Supreme Court, or amending the law in Parliament. The future of India's gay population, therefore, lies in the hands of the next government.

The government, say sources, is unlikely to file a curative petition, which is the final legal appeal and is examined by the Supreme Court's senior most judges. A judgement of 1999 says a curative petition can be filed if the petitioner has not been heard or if the ruling was based on bias, which is difficult to prove.

The other option before the government was to legislate in Parliament. The next session, starting February 5, lasts 11 days, and is the last time Parliament will meet before the national election, due by May. Sources said the government has "other priorities" for the short session. There is also no time for an ordinance, or an executive order, that has to be ratified by Parliament within six months.

Promoted
Listen to the latest songs, only on JioSaavn.com
If the Centre takes no steps now, it could spell a long struggle for the country's largely closeted gay community, which enjoyed just four years of legal approval after the Delhi High Court in 2009 exempted gay sex between consenting adults from the colonial-era Section 377 that bans sex "against the order of nature".

Though the ruling Congress took an unusually bold stand by filing an appeal against Supreme Court's decision ahead of polls in largely conservative India, the main opposition party, the BJP, has said it backs Article 377. Getting political support for a law to legalise gay sex will be tough.

Lucknow's 'Cover Up' Move After Dramatic Videos Of Crematorium Amid Covid