Galwan Valley Face-off: Major General Akash Kaushik, COS, Fire and Fury Corps, laid a wreath at the iconic War Memorial in Leh on the occasion, according to a statement by the PRO Defence, Srinagar. 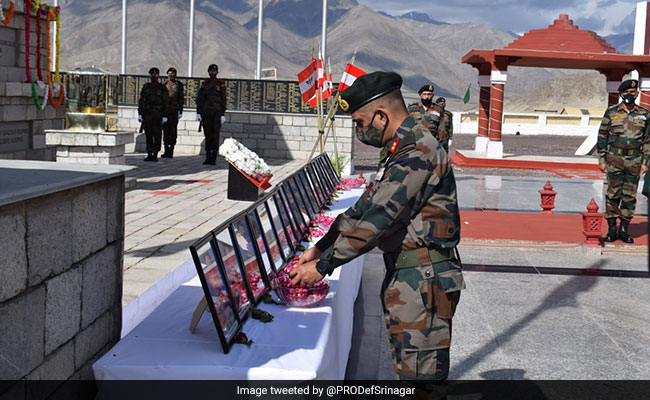 Galwan Valley clash: The nation will remain eternally grateful to the gallant soldiers, said a statement.

Fire and Fury Corps paid homage to the soldiers killed in a faceoff with Chinese troops in the Galwan valley on the first anniversary of the violent clash on Tuesday, informed PRO Defence, Srinagar.

A statement issued by PRO Defence, Srinagar said in the face of unprecedented Chinese aggression, 20 Indian soldiers laid down their lives defending our land and inflicted heavy casualties on the People's Liberation Army (PLA).

It further informed that in a solemn ceremony, Major General Akash Kaushik, COS, Fire and Fury Corps, laid a wreath at the iconic War Memorial in Leh on the occasion.

The nation will remain eternally grateful to these gallant soldiers who fought in the most difficult high-altitude terrain and made the supreme sacrifice in service of the nation, it said.

Meanwhile, a year after the violent face-off with Chinese troops in the Galwan valley, the Indian defence forces have strengthened themselves in the entire Ladakh sector through multiple initiatives.

These include building infrastructure to enhance connectivity and deploying additional troops to tackle any possible aggression by the Chinese.

The strengthening of positions has taken place at all levels in the armed forces, including both the Indian Army and Air Force.

The biggest achievement has been from the infrastructure point of view as road connectivity to all the forward locations have been improved, they said.

"Whether it is the Zojila pass, the world's new highest motorable road Umling La, Marsmik La, or Khardung La, they have been kept open for troops movement throughout the year, courtesy the Border Roads Organisation," officials told ANI.

They added that connectivity has also helped to keep up the supplies at the forward locations throughout the year and provided us the capability to deploy troops in no time.

The Indian Army has also strengthened its deployments in Ladakh as well as the entire Line of Actual Control (LAC) as it has now deployed an additional strike corps to tackle the China border.

The Indian Air Force, on its part, is also strengthening itself with the arrival of its Rafale fighter jets every couple of months, officials added.

Along with the Rafales, the MiG-29s and the Su-30 fleets have been dominating the skies all along the Northern borders and the second squadron or the planes would be ready for operations by the end of this month.

The biggest achievement of the defence forces has been in creating accommodation for the troops as the military engineers have created facilities planned to have been built in the next five years within the last 11 months, they added.

Officials said the preparedness of the armed forces is now at a level where the Chinese or any other adversary cannot spring a surprise in anyway.