Constitution Day: Quoting Mahatma Gandhi, PM Modi said the fundamental rights are those responsibilities that should be fulfilled by citizens with utmost dedication and true integrity. 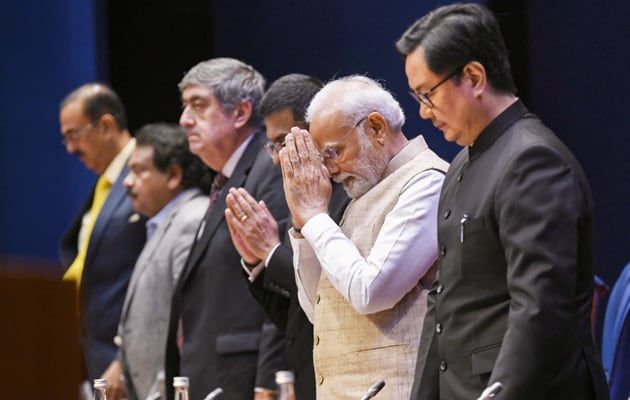 Prime Minister Narendra Modi today said fulfilling fundamental duties should be the first priority of citizens to take the nation to greater heights as it marches ahead towards the centenary of its independence.

Addressing Constitution Day celebrations at the Supreme Court, PM Modi said the entire world is looking at India which is witnessing rapid development and economic growth.

The Prime Minister said the country is set to assume the G-20 presidency next week and this is a big opportunity to present its contribution to the world.

"We, as Team India, should work towards enhancing India's prestige on the world stage and highlight the country's contribution to the world. This is our collective responsibility," PM Modi said and added that "we have to strengthen India's identity as the mother of democracy".

He said he is pleased to state that the country in the form of the mother of democracy is strengthening its ancient ideals and the spirit of the Constitution, and pro-people policies are empowering the poor and women of the country.

The Prime Minister said that defying initial apprehensions about its stability, India is moving ahead with full force and taking pride in its diversity.

Quoting Mahatma Gandhi, PM Modi said the fundamental rights are those responsibilities that should be fulfilled by citizens with utmost dedication and true integrity.

He termed the Amrit Kaal, the journey of next 25 years to emerge as a developed nation, as 'Kartavya Kaal' - an era of fulfilling the fundamental duties.

"The Azadi Ka Amrit Kaal is the time for duty towards the country. Be it people or institutions, our responsibilities are our first priority," the Prime Minister said, underlining that by walking the path of one's duties, the country can attain new heights of development.

PM Modi also stressed on the need to increase awareness about the Constitution among the youth for a better understanding of topics such as equality and empowerment.

At the outset, PM Modi also remembered the victims of the 26/11 Mumbai terror attacks that took place in 2008 as India was celebrating the adoption of the Constitution.

The Prime Minister also launched new initiatives under the e-court project, which provide services to litigants, lawyers and the judiciary through information and communication technology enabled courts.