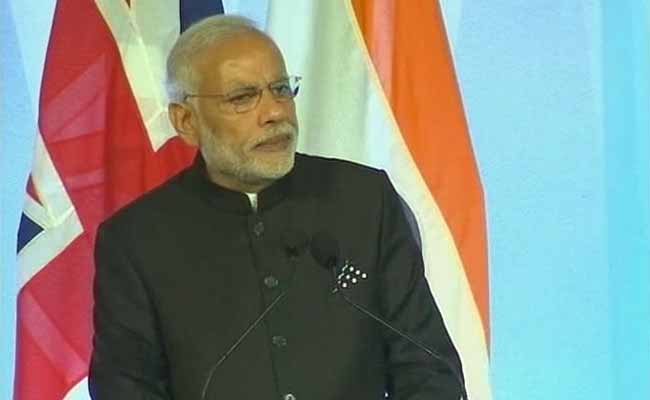 PM Modi made a strong push for 'Make in India' while addressing business leaders at The Old Library at London's Guildhall.

Prime Minister Narendra Modi, who is on a three-day visit to the UK, addressed business leaders at The Old Library of Guildhall in London. Here is the full text of his speech.

It is a great pleasure for me to be with you this evening. I must confess that there has been a delay in my coming to this great country. But, the good news is that myself and His Excellency Cameron have been in constant touch.

We have been meeting frequently at various places and exchanging views. I remember our last meeting in New York where he rightly said that India and UK should work closely on the economic front.

UK and India have known each other very well since several centuries. Our system of Governance is also based largely on the Westminster model.

That is the reason that UK is among India's major trading partners. UK is also the third largest foreign investor in India. And I must add- this is not one sided. India has emerged as the third largest source of FDI for UK. However, there is significant potential for India and UK to further strengthen their economic ties.

We have to effectively leverage the mutual understanding which is there for each other. We are particularly keen to develop the sectors where UK is strong. We are working hard to create conducive conditions for this engagement. A strong Indian community here keeps pushing us for better and better integration with UK.

Friends! Since my Government took over, we have been working relentlessly to put the economy on track. Particularly, we have worked very aggressively to make India an easy and simple place to do business. We believe that this is necessary for improving the lives of ordinary citizens in India.

The results of our hard work are now visible. IMF Chief has recently said that India is among few bright spots in global economy today. Our growth rate in the last year was 7.3%.

The World Bank has very recently projected our growth rate at 7.5% for this fiscal and even better in the coming years. Thus, we are fortunate to be sailing in the right direction. In the World Bank Report of 2016 on ease of doing business, India has moved up by 12 ranks at one go. No other country has made such a big improvement.

We are also committed to take these corrections at the State, district and city level. States are moving hand-in-hand with the federal government in this task in the spirit of cooperative and competitive federalism.

Recently, we did a ranking of our state governments on ease of doing business with the help of the World Bank Group. This has prompted the state governments into a healthy competition among themselves to ensure a business friendly eco-system.

This was for the first time that the World Bank involved itself in a sub-national exercise on ease of doing business.

One of the biggest challenges in India today is to productively employ the youth. For meeting this challenge, we need to provide a huge push to manufacturing which has stagnated at around 16% of the GDP for several decades. This share must reach around 25% in the short and medium term. With this in view, we have launched the "Make in India" initiative. We are working on all fronts to make India a global manufacturing hub.

To achieve this objective, apart from vigorous exercise for ease of doing business, we have fast tracked approvals and clearances for industry and infrastructure. The hall mark of our strategy now is Policy driven Governance. Measures like transparent auction and allocation of key natural resources like coal, spectrum, iron ore have created a level playing field for investors.

To enhance the flow of foreign investments, we have liberalized the FDI regime allowing 100% FDI in railways. We enhanced the FDI limits to 49% in Defence and Insurance. We are also conscious of the last mile operational issues in such policies. In that spirit, early this week, we have carried out substantial changes in the FDI regime across 15 sectors.

To give an example: now there are just no restrictions in the FDI Policy for construction sector. Similarly, very radical liberalization has been done in sectors like plantation, e-commerce and single brand retail. Moreover, we have now brought most of the FDI proposals under the automatic route.

With this round of reforms, I can say that India is among the most open countries for Foreign Investments.

Infrastructure is another big challenge for India. We are keen to build futuristic physical and social infrastructure. Through self-imposed discipline in financial management, we have been able to allocate more resources for infrastructure sectors. In addition, we are setting up an India Investment and Infrastructure Fund. We have targeted an annual contribution of 3.5 billion US Dollars into this fund from our own resources. We are putting in place a professional team for asset management.

We have also come up with the mechanism of Tax Free Infrastructure Bonds for projects in rail, road and other sectors. We will work together with the British Government, Industry and the financial markets to deepen our relationship and harness their interest in India's infrastructure. Very soon, these bonds will become strong instruments for engagement between our financial markets.

There were a number of regulatory and taxation issues which were adversely impacting on the sentiments of foreign investors. We have taken very decisive steps to remove a number of long pending concerns.

To give you some examples:

We have expedited regulatory clearances including security and environmental clearance;

We have increased the validity period of defence industrial licences up to eighteen years from three years previously;

This includes not going for imposition of Minimum Alternate Tax on FPIs;

We have introduced the concept of composite sector caps for the FPIs and other foreign investors.

We have notified the regulations for the Alternative Investment Funds;

We have modified the Permanent Establishment norms;

We have also decided to defer the implementation of the General Anti-Avoidance Rules for two years;

We have introduced the GST Bill in parliament; we are hopeful to roll it out in 2016;

We are working on a new bankruptcy code; the Company Law Tribunal is soon going to be formed.

We want to make sure that our tax regime is transparent and predictable. We are also keen to see that genuine investors and honest tax payers get quick and fair decisions on tax matters.

As a result of our initiatives,

the sentiments for private investment and inflow of foreign investment have turned positive.

FDI inflows have gone up by 40% compared with previous year's corresponding period.

Foreign Policy magazine of USA has ranked India as number one FDI destination.

In a study of 100 countries on Growth, Innovation and Leadership, India has been ranked No.1 by Frost & Sullivan.

India has improved its UNCTAD ranking of investment attractiveness from 15th to 9th.

MOODY's have upgraded the rating of India as positive.

Thus, just in eighteen months, we have successfully restored the credibility of India in the eyes of global players. Through PPP, we are encouraging private investments in areas where earlier only government used to invest. We are also divesting our stake in the public sector enterprises, to instill market discipline. We are keen to learn from your experience in structuring and implementing PPP projects.

I am personally convinced and want to assure you that India is committed to protect Intellectual Property Rights of all innovators and entrepreneurs. We have taken several initiatives for transparency and online processing in IP administration. A comprehensive National IPR policy is being finalized.

We want your active involvement in translating our dreams into reality. Our commitment and aggressiveness to achieve the goal in a faster and effective manner offers immense opportunities to British Companies. These opportunities range from building 50 million houses to setting up 100 smart cities; modernization of railway network and re-development of stations to new railway corridors; generation of 175 GW of renewable energy to transmission and distribution networks, from National Highways and bridges, to Metro rail networks. Such a huge potential for creation of infrastructure and production of goods will not be available in any other country. More importantly, no one place on the earth can offer the potential for usage and consumption on such a massive scale.

We are trying to harness this potential through our policies and people. The campaigns like Digital India and Skill India are designed to prepare the people to take part in this process. To tap their energy fully, we have also launched the Start up India Campaign. We have witnessed massive growth in the number of start-ups in the recent past. Some of these have already begun to challenge established global players.

India is on the threshold of a big IT revolution. We are encouraging it to fast-track the services to our 1.25 billion people. New Technology and renewable energy is our new Mantra. Whatever we do, we will do in a cleaner and greener way. Energy efficiency, water recycling, waste to energy, clean India and river cleaning are among those initiatives. These initiatives provide additional avenues for investment in modern technology and human resources.

Ours is a country of the vibrant youth and a rising middle class. There is a huge domestic market in India. I have been saying that the three Ds of Democracy, Demography and Demand is our basic strength. Moreover, talented young minds in India have now begun taking risks. They are preferring to become Entrepreneurs. Thus, we have moved forward from D to E which is Entrepreneurship.

Necessary conditions for take-off of the Indian economy have been created. Never before, India was so well prepared to absorb talent, technology and investment from outside. I can assure you that it will get better and better in the coming days. We will be open to welcome your ideas, innovations and enterprises. We are open to carry out necessary corrections in our policies and procedures. Given the visionary and dynamic leadership of Prime Minister Cameron and his interest in India, I am personally eager to work with the British Government and companies.

With these words, I welcome you to India. I assure you of my personal care in making your dreams a reality. Many of you belong to India; Many of you are in India already. But for those who are not there, I must say that:

At this point of time, it is wiser to be in India;

Further, we are making it easier to invest in India

Believe me, we are making it even better to 'Make in India'.

Thank you. Thank you very much.