The protesters were taken to the Parliament Street police station where they continued their protest.

New Delhi: More than three months after it started, the stalemate at India's premier film school shows little sign of a resolution.

Joined by students from the Delhi University, students of the Film and Television Institute of India or FTII sat on a day-long hunger strike in front of a government office in New Delhi today, demanding the removal of Gajendra Chauhan as the chairman of the college.

Holding placards and shouting slogans, about 20 students squatted on the pavement in front of Shashtri Bhawan, which houses the offices of the Information and Broadcasting Ministry at the heart of capital. 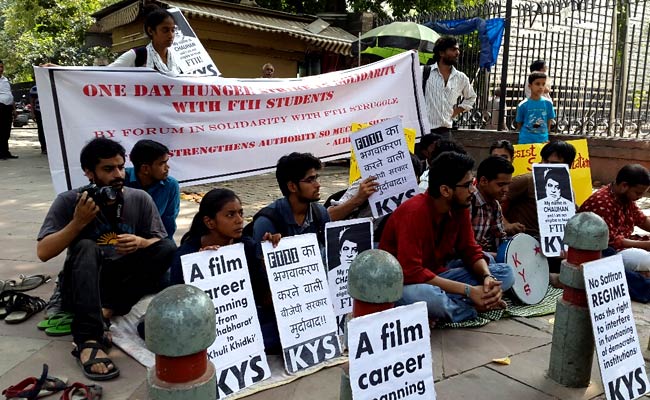 A similar protest was held yesterday in Kolkata with the support of Jadavpur University students.

But within an hour of starting their protest, they were rounded off by the police, witnesses said.

A police officer said the students did not have permission to protest in front of the government offices where Section 144 of the Criminal Procedure Code, which prevents an assembly of 10 or more people in an area, was in place.

The protesters were taken to the Parliament Street police station where they continued their protest.

"We oppose the kind of saffronisation this government is trying to do. Gajendra Chauhan does not have the credentials to head an institute like FTII. He has been appointed there only because of his political affiliation," said Kislay, a third year student of FTII who was part of the protest.

'Saffronisation' is a term used by critics of the BJP, which rules Centre, to denounce moves seen as right wing or pro-Hindu.

A similar protest was held yesterday in Kolkata with the support of Jadavpur University students and another one is scheduled in Mumbai's Azad Maidan tomorrow.

Classes have been suspended at FTII for more than 95 days now since the Central government announced the appointment of small-time actor and BJP member Gajendra Chauhan as the chairman of FTII.

Speaking in Pune on Monday, Mr Chauhan said, "Hunger strike is no solution. I request the students to sit across and have a dialogue with the minister or ministry officials."