The leader of the RSP, a constituent of the Left Front, served as the state PWD minister for more than two decades -- since the late eighties till 2011, when the regime was voted out of power. 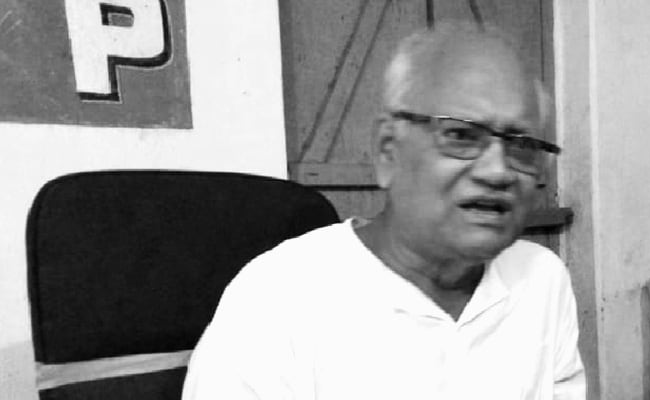 He was 77 and is survived by his wife and daughter. Apart from age-related illness, Kshiti Goswami was also suffering from a lung infection for which he was admitted to the Chennai hospital where he breathed his last, the family sources said.

The leader of the RSP, a constituent of the Left Front, served as the state PWD minister for more than two decades -- since the late eighties till 2011, when the regime was voted out of power.

Although an important member of the Left Front, Kshiti Goswami never shied away from criticising the erstwhile dispensation in the state over some of its policies -- be it forcible land acquisition in Singur for a car manufacturing plant or the attempt to set up a chemical hub in Nandigram despite stiff resistance from farmers.

According to a senior RSP leader, Kshiti Goswami along with other Left Front partners, such as the CPI and the Forward Bloc, had a showdown with the senior partner of the Front, the CPI(M), over the two issues at various party meetings.

Known as a jovial and media-friendly politician, he was of the opinion that the Left in Bengal has to reinvent itself to remain relevant in state politics.

The veteran leader had opposed the Left Front-Congress alliance in 2016 Assembly polls, saying it would be disastrous for the Front and its constituents.

However, after the Front's debacle in 2019 Lok Sabha polls, he gave in and agreed to have an understanding with the Congress to fight against the ruling TMC and the opposition BJP in the state.

His body will be brought to Kolkata in the evening and the last rites will be performed on Monday. Leaders cutting across party lines condoled Kshiti Goswami's death on Sunday.

West Bengal Chief Minister Mamata Banerjee said his death was a huge loss to Indian politics. "I am deeply shocked and grieved by the sudden demise of Kshiti Goswami. He passed away this morning in Chennai.

This is an immense loss to Indian politics," Banerjee said in a statement released from the Chief Minister's Office. West Bengal Left Front chairman and CPI(M) politburo member Biman Bose also expressed his condolences. Leader of the Congress in Lok Sabha, Adhir Ranjan Chowdhury, said Goswami's death has left a deep void in the political landscape of the state.

"He was an honest leader. He will be deeply missed," Adhir Ranjan Chowdhury added.