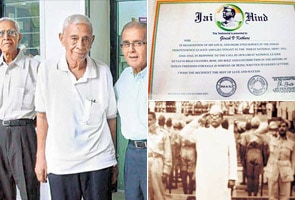 Mumbai: In a small Udipi restaurant on Singapore's Serangoon Road, a group of octogenarians greet each other with "Jai Hind". They remember phone numbers with difficulty, but lucidly recall their INA days.

Each of them carries copies of a certain certificate with pride. It is the only, slim testimonial to prove that they belonged to the first real national army of India, their homeland which is about 3,000 km away.

Bala A Chandran, Girish Kothari and Kishore Bhattacharya were once members of the Indian National Army (INA), a band of revolutionary fighters that Netaji Subhash Chandra Bose created in 1943 from among Indian immigrants in Singapore and other parts of South-east Asia to fight the mighty British military machine.

There is still a vibrant subculture of participants and descendants of INA in Southeast Asian countries including Singapore, Japan, Thailand and Malaysia.

Bala Chandran joined the Balak Sena, Kishore Bhattacharya the Tokyo Cadets while Girish Kothari the Officers' Training School at Nissun Camp (Yishun of modern day Singapore). Whichever wing of the INA they were a part of, the single-minded intent was to be among the 45,000 Indians from the diaspora who fought against British occupation of India.

After Bose's disappearance on August 18, 1945, INA's men and women were left largely to fend for themselves against the returning British Army. Keeping in mind Bose's rift with the Nehru-Gandhi camp and his radical views on the Civil Disobedience Movement, it is not difficult to discern why.

Today, after several years of neglect after Independence, the ex-INA members, with some exceptions, were refused service in the Indian Army the only recognition of Bala Chandran, Kothari and Bhattacharya's place in India's history is their certificates from the Ex-INA Committee, a committee set up in Singapore after the war and later "approved by" the Indian Government. Dated July 2007, these certificates are a classic example of too little too late.

Bala Chandran was just 14 when he joined the Balak Sena - the youth wing of the INA. A third-generation Indian in Singapore, he caught only stray words from Netaji's speech at the Padang because he did not know Hindustani, and still was moved to tears. When he reached home, he could not sleep.

"I knew I had to do something," he says. Coming from a relatively affluent background, he faced stiff opposition from his family. Still, the next day found him at the INA headquarters. When he was offered the job of a peon he did not hesitate because at any cost he wanted to be a part of the war effort.

Bala Chandran still recalls the night he, along with a few other young cadets, decided to defy army orders and under cover of darkness reached the office of INA seniors Major General Alagappa and Major General Loganathan at the Chancery Lane bungalows with an urgent request to allow them to fight at the Burma border.

Kothari had come to Singapore in 1940 to eke out a livelihood for his really poor family in Junagarh. And yet he put the very real material needs of his family on the backburner as he plunged into the independence struggle and decided to join the INA.

He recalls that after the war was over and the INA summarily disbanded, he left the INA quarters with nothing but the set of clothes he was wearing. He telegrammed his father, who immediately wired back, "Send home money."

"Those days our spirits were different you know," he says with a smile. "We happily survived on a daily breakfast of soya beans fried in vegetable oil and a lunch of soya beans and obi. We just wanted to see a free India."

And still, after Independence when he travelled across India in search of employment, he did not get any response and was forced to come back to Singapore where he lives with family.

Kishore Bhattacharya has come to their meeting point on Serangoon Road after a recent intestinal surgery, walking with a stick and assisted by his wife. "I have to come because you mentioned Netaji," he says with difficulty. He recalls his days at the Seletar Camp where he had the opportunity to personally interact with Netaji. On hearing his name, Netaji had told him in Hindi: "You are Bengali? Welcome!"

K Kesavapany, director of the Institute of South East Asian Studies, puts it aptly: "Bose built an army of Indian outcasts." In the INA, Netaji recruited Tamil Malayans considered "non-martial" and ignored by military tradition. They were rubber plantation workers with their history of colonial oppression.

The Prisoners Of War (POWs) who formed the backbone of the INA were burdened with the guilt of serving the Raj - distrusted by their British Commanders and Indians alike. With the Rani Jhansi Army, Bose empowered women as an equal party in the military struggle for freedom.
And despite the subsequent defeat of the INA on the battlefield, lives changed forever for those who had lived through these glorious, inspiring times. An army veteran, KR Das, in Subhas Chandra Bose: A Malaysian Perspective, mentions: "He turned the servile Indian labourer in the plantations of Malaya into a proud, self-respecting man...when the planters returned after the war, they found a different Indian...they organised themselves into powerful labour unions and negotiated with the employers on an equal level."

Bala Chandran recalls: "When the British returned, there was a noticeable change in their attitude towards Asians." The word coolie was replaced by a more politically correct 'labourer' and higher positions were offered to Asians in the bureaucracy.

So, while demands of everyday life took over after the war, a wider purpose of life remained even for the Indian soldiers in Singapore. Bhattacharya joined the Singapore police, Kothari delved into community service providing medical and educational aid to the poor through the local Gujarati Association.

Inspired by INA ideals, he tried to bring all Indians under one umbrella but failed and had to reconcile himself to working within his community. "Only Netaji could do that you know the INA had no religion," he says.

Bala Chandran involved himself with grassroots issues he joined the Labour Party of Singapore and continues to work for the betterment of the working class.

Did they ever think of going back to India, the motherland they had set out to liberate?

They are unanimous in their reply that the "truncated freedom" achieved over Partition and communal riots is not the India of their dreams. Whenever they have gone to India they have also been disturbed by the rampant corruption.

"We were advised to request the Indian government for pension or free railway pass. But we did not join the INA for compensation and when nothing was done for us, we left it at that," says Bala Chandran.

Today, Singapore is where they belong. But they are quick to add: "Whether Singaporean or Indian, we will always be INA men at heart."

Many believe the seed of India's final victory lay in INA's defeat. The Red Fort trials of the INA leaders, staged by the British, raised a patriotic storm, which refused to die down.

Eminent historian Ramesh Chandra Majumdar observes in his book Three phases of India's Struggle for Freedom: "There is... no basis for the claim that the Civil Disobedience Movement directly led to Independence. The campaigns of Gandhi... came to an ignoble end about 14 years before India achieved Independence... The revelations made by the INA trial, and the reaction it produced in India, made it quite plain to the British... that they could no longer depend upon the loyalty of the sepoys... This had probably the greatest influence upon their final decision to quit India."

Netaji had kept his promise to his people: "Give me blood, I shall give you freedom."
Comments
NetajiSubhash Chandra BoseIndian National ArmyINA