The elephant is being monitored, an officer from the Indian Forest Service confirmed. 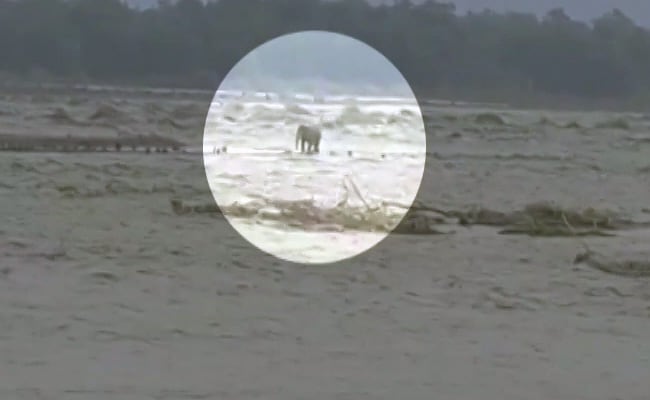 The elephant was stranded near Jim Corbett park.

Unprecedented visuals of flooding and rescue operations have captured the damage in Uttarakhand after three days of heavy rain in several parts of the state. Prime Minister Narendra Modi this morning spoke to Uttarakhand Chief Minister Pushkar Singh Dhami to take a stock of the situation.

Ten teams of the National Disaster Response Force are on duty in the state. NDRF chief Satya Pradhan tweeted some photos and videos this morning that showed rescue personnel in action in the rain-battered town of Rudraprayag.

While many such videos are being shared on social media, a clip of an elephant stranded in the raging flood at Nainital near the Jim Corbett Park went viral earlier today.

In the video, an elephant can be seen stuck in the midst of the Gaula river. Visuals showed the elephant moving in circles on a small patch of land as the river continues to flow unabated all around it

Uttarakhand: In a viral video, an elephant was seen stranded on a piece of land in a raging Gaula river, between Halduchaur and Lalkuan. It was later directed towards forest by Forest Department officials.

(Screenshots from the viral video) pic.twitter.com/yR325BxAnp

However, it has now been reported that the elephant has been rescued.

"As soon as we received the info, a team of forest department was dispatched. The elephant had crossed the river and moved towards Dev Rampur. The forest department has pushed its towards forest. Its movement is being monitored," Sandeep Kumar, Divisional Forest Officer, Haldwani, was quoted as saying by news agency ANI.

As soon as we received the info, a team of forest dept was dispatched. The elephant had crossed the river & moved towards Dev Rampur. The forest dept has pushed its towards forest. Its movement is being monitored: Sandeep Kumar, DFO Haldwani pic.twitter.com/jtqld5qIx8

Four people have died so far, and at least 12 are missing after heavy rains hit the state.

Uttarakhand is not the only state that has been grappling with the aftermath of heavy downpour. Over the weekend, Kerala saw more than 20 deaths after landslides and flooding in several parts. Tamil Nadu too is battling flooding.