Hatwa village and its nearby areas have been badly affected as Ghaghra river continues to be in spate. The locals are angry with Yogi Adityanath for not visiting their flood-hit village. 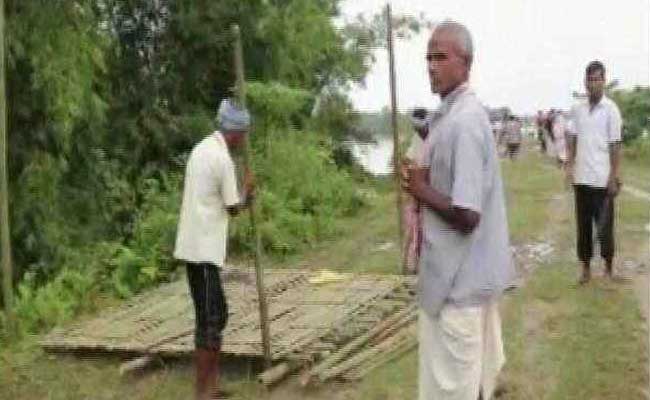 Uttar Pradesh's Hatwa village and nearby areas have been badly affected by excessive floods.

Lucknow: Angry at Uttar Pradesh Chief Minister Yogi Adityanath for not visiting their flood-hit village, dozens of irate villagers in Hatwa in Lakhimpur Kheri district have started a 'jal satyagraha'.

The villagers started the 'jal satyagraha' on late Thursday by standing in the neck-deep water of river Ghagra, officials said.

Officials had a tough time in trying to convince the protesters to withdraw the unconventional protest and assured them that immediate relief operations would be set rolling in their village.

The villagers, however, threatened they would again enter the deep water of the Ghaghra if adequate relief material is not sent to the village within the next 24 hours.

Yogi Adityanath's scheduled visit to the village on Wednesday had to be called off at the last moment, officials said. The Chief Minister flew back from Sisaiyya.

Hatwa village and its nearby areas have been badly affected as Ghaghra river continues to be in spate.

There are reports from many places of poor relief and rescue measures, an allegation denied by the state government.

Many parts of eastern Uttar Pradesh including Gorakhpur, Maharajganj, Lakhimpur Kheri, Siddharthnagar, Bahraich and Balrampur have been ravaged by excessive rains and also due to the water released by neighbouring Nepal.

Vast stretches of land in these districts have been submerged and thousands of people displaced.

Yogi Adityanath, along with senior ministers and officials, has been conducting an aerial survey of the flood affected areas and on Friday flew to Siddharthanagar and Balrampur to distribute relief materials to the people and to meet them to ascertain the truth on the ground.