Besides Raju Theht, a wanted gangster, a man identified as Tarachand Kadwasara, who had gone to meet his daughter studying in a coaching institute there, was also hit by bullets and died. 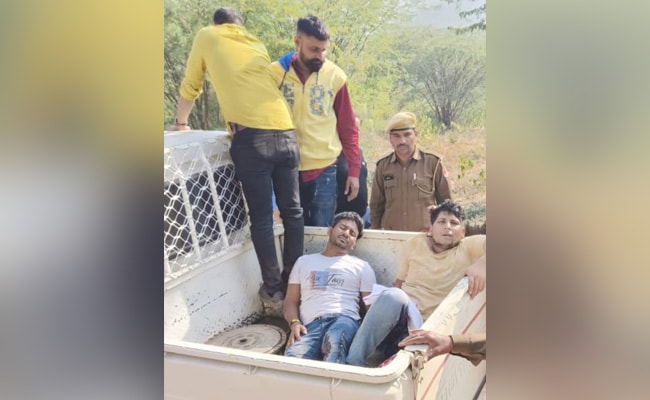 The men were caught after an encounter in which two were injured.

Five men have been arrested for the gang war shooting that killed gangster Raju Theht and one more person at the gate of his house in the Sikar district of Rajasthan a day ago, Chief Minister Ashok Gehlot said on Sunday.

According to the police, they were caught after an encounter in which two were injured.

Besides Theht, a wanted gangster, a man identified as Tarachand Kadwasara, who had gone to meet his daughter studying in a coaching institute there, was also hit by bullets and died. The accused fired at him, thinking that he was Theth's aide.

They snatched the keys to Kadwasara's car and escaped, the police said.

According to the police, Theth, who had more than 30 criminal cases against him, had a rivalry with the dreaded criminal Anandpal Singh, who was killed in a police encounter in June 2017. Out on bail, he used to live a luxurious life and had political ambitions.

Director General of Police (DGP) Umesh Mishra said in Jaipur that the police have caught Sikar residents Manish Jat and Vikram Gurjar, and Haryana's Satish Kumhar, Jatin Meghwal and Navin Meghwal. The police personnel who caught the accused will be rewarded, the police chief said. The car in which the gangsters fled has also been seized.

In a tweet, Chief Minister Ashok Gehlot said, "Five accused of yesterday's murder case in Sikar have been arrested along with recovery of their weapons and vehicles. Speedy trial of all these accused will be ensured by the court to give them severe punishment at the earliest."

After Theht was shot dead on Saturday, a man named Rohit Godara, who introduced himself as a member of the Lawrence Bishnoi gang on Facebook, claimed responsibility for the killing, saying it was to avenge the death of Anandpal Singh and Balbir Banuda.

Banuda, a member of the Anandpal gang, was killed in a gang war in Bikaner jail in July 2014, and it was alleged that Theth was behind the murder. The Facebook post was later deleted.

However, Godara shared another post on Facebook at night, saying Theth was his enemy, and he has no regrets about his killing but apologised to the family of Kadwasara, a farmer from Nagaur district, and his community.

He also said that he will try to support Kadwasara's family in every possible manner.

CCTV footage of the incident showed the five men with Theth at the gate of his house. A tractor-trolley drove up to the front of the house and the assailants fired at Theth. Officials suspect that the tractor driver was also involved in the crime.

In another video clip, the accused were seen fleeing after killing Theth.

Hours after the murder, a speeding car, believed to be that of the accused, was spotted in Jhunjhunu district by some locals who claimed that the occupants opened fire at some labourers repairing the road to get the way cleared, the police said.

Family members and relatives of Theht and Kadwasara sat on a protest in front of the mortuary of the district hospital in Sikar on Saturday, demanding the arrest of the accused. Congress MLA Mukesh Bhakar from Ladnu in Nagaur was also present at the dharna.