On the lines of New Delhi's iconic Lotus Temple the RRTS rolling stock will have lighting and temperature control systems with less energy consumption. 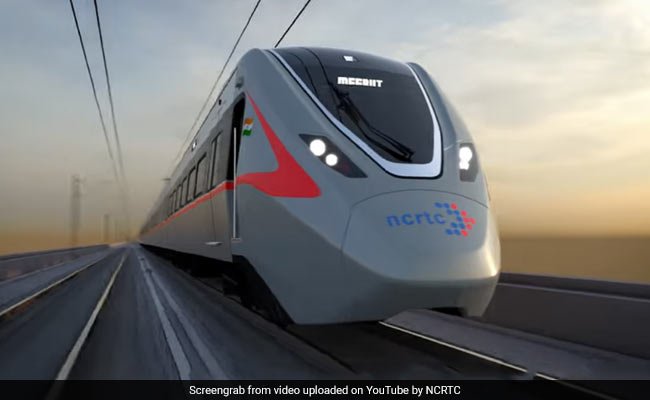 One coach on every train will be reserved for women passengers.

The first look of energy-efficient trains with a design speed of 180 kmph for the Regional Rapid Transit System (RRTS) was unveiled on Friday by Durga Shanker Mishra, Secretary, Ministry of Housing and Urban Affairs (MoHUA) in New Delhi. The Delhi-Ghaziabad-Meerut corridor is one of the three prioritised RRTS corridors being implemented in phase-1.

According to National Capital Region Transport Corporation (NCRTC), which is mandated to implement India's first RRTS in the NCR, the state-of-the-art rolling stock will be first of its kind in the country. On the lines of New Delhi's iconic Lotus Temple, whose design allows the flow of natural sources of light and air circulation, the RRTS rolling stock will have lighting and temperature control systems with less energy consumption.

With radiating stainless steel outer body, these aerodynamic RRTS trains will be lightweight and fully air-conditioned, said NCRTC. Each car will have six automatic plug-in type wide doors, three on each side, with push buttons for the selective opening of doors on need basis. This eliminates the requirement of opening all doors at every station, thus leading to energy saving. The train has been designed keeping in mind high acceleration and deceleration, given the maximum operational speed of 160 kmph and stations at every 5-10 km.

The trains will also have one business-class coach each with spacious, comfortable and reclining seats, accessible through a special lounge at the platform-level. The business class will have four doors, two on each side. An automatic food-vending machine will also be installed in the business coach.

Also, one coach on every train will be reserved for women passengers.

Given the high-speed train operations, all RRTS stations will have Platform Screen Doors, to which the train doors will be integrated.

Mishra, who is also the NCRTC Chairman, said infrastructure is one of the five pillars of Atma Nirbhar Bharat, envisioned by Prime Minister Narendra Modi. "It is a matter of great pride that these high-speed, high-frequency commuter trains for RRTS are entirely being manufactured under the government's "Make in India" policy. The environment-friendly, energy-efficient trains will improve the quality of life in and around NCR by accelerating economic growth, creating economic opportunities and at the same time reducing air pollution, carbon footprint, congestion, and accidents."

Deliberating on the benefits of the project, NCRTC Managing Director Vinay Kumar Singh said the RRTS rolling stock will be energy-efficient with about 30 per cent regeneration during braking. "The NCRTC has awarded the rolling stock work with an integrated long-term comprehensive maintenance by the manufacturer, thus leveraging the benefits of life cycle costing," he said.

The entire rolling stock for Delhi-Ghaziabad-Meerut RRTS corridor will be manufactured at Bombardier's Savli plant in Gujarat. It will have double-glazed, tempered large safety glass windows that will offer passengers a panoramic view of the outside.

Equipped with public announcement and display systems, dynamic route map and infotainment display, along with emergency communication facilities, the train is designed for modern visual and audio announcements, which orient passengers with information about next stop, final destination, etc.

Besides, the train will have close circuit television cameras, fire and smoke detector, fire extinguisher and door indicator, apart from a universally accessible dedicated wheelchair space located near the doorway.

The 82-km-long Delhi-Ghaziabad-Meerut corridor, the first RRTS corridor being implemented, will bring down the travel time between Delhi and Meerut by around one-third to less than an hour from three to four hours by road at present. Civil construction work on about 50-km long section between Sahibabad and Shatabdi Nagar, Meerut, is in full swing, including the construction of four stations - Ghaziabad, Sahibabad, Guldhar and Duhai. The priority section of the corridor is targeted to be commissioned in 2023, while the entire corridor will be commissioned in 2025.

The other two Phase-I RRTS corridors are Delhi-Gurugram-SNB and Delhi-Panipat. Pre-construction activities are in full swing for Delhi-Gurugram-SNB corridor and its Detailed Project Report (DPR) is under active consideration of the Government of India for sanction. The DPR of the Delhi-Panipat RRTS corridor is also under active consideration of the respective state governments for approval.

The NCRTC board of directors and senior officials of the MoHUA, NCRTC and Bombardier India were also present on the occasion.