On Thursday, Congress leader Jairam Ramesh had said it was "time we recognize PM Modi's work and what he did between 2014 and 2019 due to which he was voted back to power". 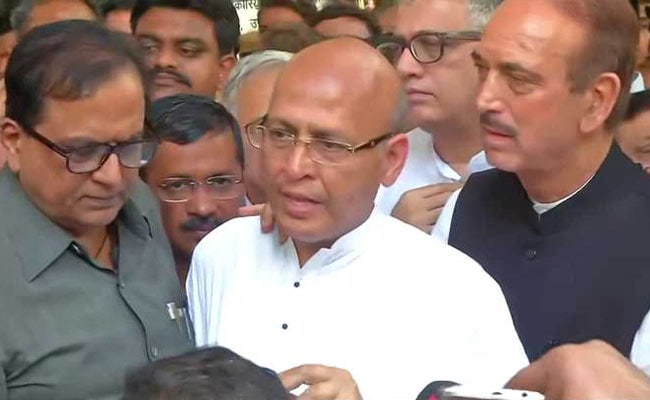 After Jairam Ramesh, another senior Congress leader, Abhishek Manu Singhvi, has said that "demonizing Prime Minister Narendra Modi is wrong" and that acts should be judged "issue-wise and not person-wise". Abhishek Manu Singhvi was reacting to comments by Jairam Ramesh, who, at a book launch yesterday, sought to analyse the positives of the Modi government and asserted that not acknowledging his achievements would not help the opposition.

"Always said demonising PM Modi wrong. Not only is he the PM of the nation, a one-way opposition actually helps him. Acts are always good, bad and indifferent - they must be judged issue wise and not person-wise. Certainly, Ujjawala scheme is only one amongst other good deeds," Mr Singhvi said in a tweet tagging Jairam Ramesh.

Always said demonising #Modi wrong. No only is he #PM of nation, a one way opposition actually helps him. Acts are always good, bad & indifferent-they must be judged issue wise and nt person wise. Certainly, #ujjawala scheme is only one amongst other good deeds. #Jairamramesh

The Congress has been jolted quite recently by the support within for PM Modi's radical move to end special status to Jammu and Kashmir.

On Thursday, Mr Ramesh had said it was "time we recognize PM Modi's work and what he did between 2014 and 2019 due to which he was voted back to power by over 30 per cent of the electorate." He said PM Modi spoke a language that connected him with the people. "Unless we realise that he is doing things which people recognise and which have not been done in the past, we are not going to be able to confront this guy," said the Congress leader, who was minister for Rural Development and Drinking Water and Sanitation in the Manmohan Singh government.

"Also, if you are going to demonise him all the time, you are not going to be able to confront him," warned the former Union minister. He clarified that he was not asking anyone to applaud the prime minister but just wanted the political class to "recognize the traits he has brought to governance".

Mr Ramesh also cited what he called the success of PM Modi's pet scheme Pradhan Mantri Ujjwala Yojana to distribute gas connections to the poorest women. "In 2019, all of us in the political discourse made fun of one or two of his programmes, but it has turned out in all electoral studies that the (Ujjwala Yojana) is one single program which has been able to connect him with crores and crores of women and given him the political traction which he didn''t have in 2014," said the Rajya Sabha member from Karnataka.

Something had happened, he said, which had catapulted PM Modi from a "non-entity" in national politics in the 2009 general elections to someone who won elections back-to-back. "We talked about farmers distress throughout our entire campaign, people realise there was farmers' distress but they did not hold (Narendra) Modi responsible for it. You saw what happened in the elections result thereafter. We have to understand what made him respectable," he said.

These comments by two Congress leaders contrasts sharply with the line taken by the Rahul Gandhi-led Congress in the national election campaign earlier this year. Rahul Gandhi, who resigned as Congress president after the party's second straight debacle, had fashioned his entire campaign around the phrase "Chowkidar Chor Hai" based on allegations of corruption in the deal signed off by PM Modi for the purchase of Rafale fighter jets. The campaign flopped and the Congress was back to the drawing board.

Mr Ramesh and Mr Singhvi's comments reflect calls within the Congress for a new narrative to take on PM Modi, by attacking not him, but his policies.