Mohammad Aslam Lone said his son Shoaib Lone is an MBBS student at Barind Medical College Dhaka and met with a car accident while travelling with four other people. 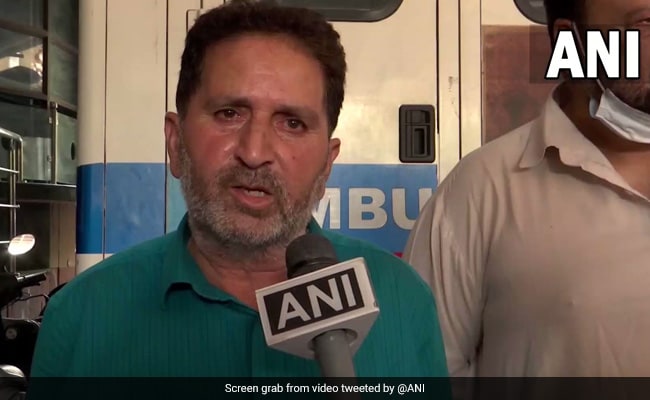 Shoaib Lone is the only Indian national who was brought to India by an air ambulance.

Mohammad Aslam Lone, a resident of Rajouri in Jammu Kashmir, is all praise for Prime Minister Narendra Modi for the efforts of the government to bring his son to AIIMS New Delhi after he was seriously injured in an accident and was undergoing treatment at a Bangladesh hospital.

Aslam Lone said his son Shoaib Lone is an MBBS student at Barind Medical College Dhaka and met with a car accident while travelling with four other people.

Narrating his ordeal after the accident, he said Shoaib was taken to hospital by locals and the family reached Dhaka after some delay due to efforts in arranging visa and other documents.

#WATCH | Father of Shoaib Lone narrates his ordeal after his son met with a car accident in Dhaka & thanks PM Modi for his airlift to India. Shoaib is a resident of Rajouri, Jammu & a final year MBBS student at Barind Medical College, Dhaka. He's currently admitted at AIIMS Delhi pic.twitter.com/QlQjfmKdal

On reaching Dhaka, the family faced problems including "language barrier" and "high cost of treatment".

He said they incurred expenses of Rs 12 lakh for 10-day stay in hospital and "there was not much improvement in condition".

"We were in great difficulty," Aslam Lone said.

He said that Jammu and Kashmir BJP president Ravinder Raina visited Rajouri and the problem was posed to him by people known to them. The BJP leader promised to apprise the Prime Minister's Office of the matter.

"I am very grateful to Modiji. It is said that giving thanks lessens the value of the deed done but I do not want to be ungrateful. I salute him by standing on one leg. If a country has a leader like this, like the leader we have in Hindustan, where there are such good to take care, people should not be afraid. I say thanks to Prime Minister one crore times. I also thank Rainaji and all those who helped us," Aslam Lone told ANI.

He said they were at AIIMS trauma centre due "PM's intervention". "It was quick response from PMO who helped the common man of the country."

Shoaib is the only Indian national who was brought to India by an air ambulance today and admitted to the AIIMS Trauma Centre in New Delhi under a team of specialist doctors. The accident in Bangladesh was serious and two co-passengers of Shoaib had died.

Sohaib Lone's mother was also at AIIMS hospital in Delhi and felt emotional succour seeing him under treatment at the specialised government hospital here.