A high-level Indian delegation led by Foreign Secretary Vijay Gokhale and Defense Secretary G Mohan Kumar were scheduled to be in US for a series of preparatory meetings with their American counterparts for the next month's dialogue. 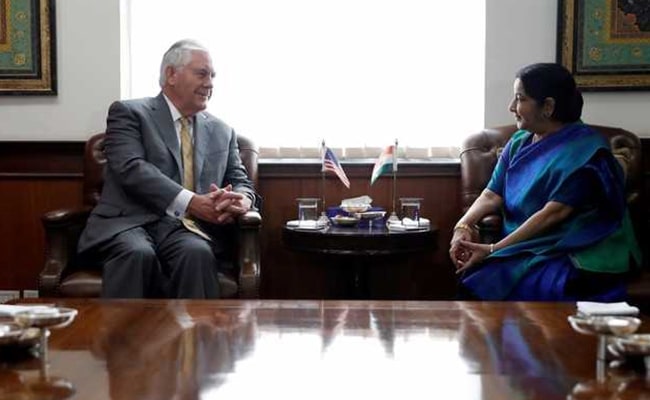 The dialogue involves External Affairs Minister Sushma Swaraj and the US counterparts. (File)

Washington: The India-US two-plus-two dialogue could be among the first major bilateral engagements of Mike Pompeo as the Secretary of State next month, if the CIA Director is confirmed as America's top diplomat by the Senate in next few weeks.

The launch of the dialogue was announced last summer when Prime Minister Narendra Modi had a successful meeting with US President Donald Trump at the White House.

Trump yesterday fired Rex Tillerson as Secretary of State and nominated Pompeo as his replacement.

Pompeo needs to be confirmed by the Senate before he can occupy the Foggy Bottom headquarters of the State Department.

Before leaving for Africa, Tillerson had issued specific direction on the two-plus-two dialogue, which for all practical purposes was scheduled for around mid-April in Washington DC. However, a formal announcement has not yet been made.

A high-level Indian delegation led by Foreign Secretary Vijay Gokhale and Defense Secretary G Mohan Kumar were scheduled to be in US for a series of preparatory meetings with their American counterparts for the next month's dialogue.

The State Department and the Indian Embassy in Washington DC did not respond to a series of questions on the fate of these meetings this week in the wake of the president's decision to fire Tillerson.

Promoted
Listen to the latest songs, only on JioSaavn.com
Given the fast-paced developments in Washington DC and Trump's focus on preparing his meeting with North Korean leader Kim Jong-un before May, it is very well possible that the two-plus-two dialogue could be postponed for later this year, even if Pompeo is confirmed in the next few weeks, according to sources.

However, given the significance Trump attaches to India, it would be a tough call to change the dates of the maiden India-US two plus two dialogue, they said.