"He Was Dumb As A Rock": Trump After Ex-State Secretary Criticises Him

Tillerson privately fought against many of the budget cuts the White House enforced on him, writing letters in which he argued for more time to downsize and reform the department's structure. 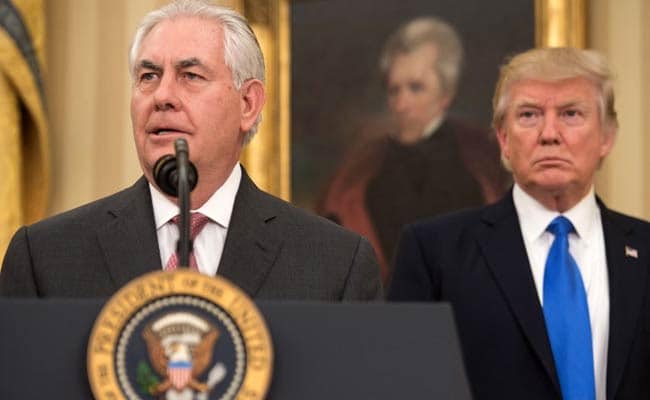 Absence does not make the heart grow fonder when it comes to President Donald Trump and his first secretary of state, Rex Tillerson.

Nine months after Trump summarily dismissed his top diplomat by tweet, Trump and Tillerson were back to bickering as they traded accusations in a relationship that at turns has been icy and blistering.

After Tillerson publicly said their encounters grew rocky over Trump's directives to do things that were illegal, Trump hit back in a tweet in which he branded Tillerson "dumb as a rock" and "lazy as hell."

The biting retort came after Tillerson made his first public remarks about Trump during an appearance Thursday night at a charity event in Texas, where Tillerson has retired to his ranch.

"So often, the president would say, 'Here's what I want you to do, and here's how I want you to do it,' " Tillerson said at a fundraiser for the MD Anderson Cancer Center in Houston.

"And I would have to say to him, 'Mr. President, I understand what you want to do. But you can't do it that way. It violates the law,' " he said.

As if to confirm how toxic their interactions had become, Trump praised Tillerson's successor, Mike Pompeo, and then dismissed the abilities of Tillerson, who ran Exxon Mobil before stepping down to work for Trump.

"Mike Pompeo is doing a great job, I am very proud of him. His predecessor, Rex Tillerson, didn't have the mental capacity needed. He was dumb as a rock and I couldn't get rid of him fast enough. He was lazy as hell. Now it is a whole new ballgame, great spirit at State!"

Trump's judgment on Tillerson was the polar opposite when he nominated him, praising him in December 2016 as a "world-class player" who made "massive deals" while CEO of a mammoth oil company.

But the honeymoon was short-lived.

Tillerson privately fought against many of the budget cuts the White House enforced on him, writing letters in which he argued for more time to downsize and reform the department's structure. But ultimately he slashed staffing, which contributed to low morale as veteran diplomats were shown the door or made to feel unwelcome and unvalued.

The two men also had starkly different worldviews that manifested in differences over foreign policy.

Tillerson often said he woke up every morning worrying that a State Department employee would be harmed on his watch. That buttressed his conviction not to rush moving the U.S. Embassy in Israel from Tel Aviv to Jerusalem, saying it would take years to build a facility to adequately meet all the security needs of the workers. Trump wanted the relocation to take place much faster, and a small mission opened in East Jerusalem in May, about six weeks after Tillerson was canned.

But before he even completed his first year, the rifts were spilling into public view.

After a news report that he had called Trump a "moron," with an expletive as an adjective, at the end of a meeting at the Pentagon, Tillerson refused to directly deny having said it. He deflected questions about the remark as "petty" and turned it into a moral judgment on Washington, which he characterized as "a town that seems to relish in gossip, rumor and innuendo."

Since he was dismissed, Tillerson previously had avoided any direct rebuke of his former boss. The closest he came to criticizing Trump was during a commencement speech he made at Virginia Military Institute in which he lamented "a growing crisis of ethics and integrity" and said truth was "the essence of freedom."

In his remarks in Houston on Thursday, Tillerson did not offer any specific examples of the Trump directives he deemed illegal. He said he offered to work to change the law, but that apparently did not curb the president's frustration.

Tillerson noted that he had never met Trump before Vice President Mike Pence invited Tillerson to the White House. At the end of his meeting with Trump, Tillerson said, he was offered the job.

Tillerson, who as secretary of state carved hours out of his daily schedule to read briefing papers, said Trump didn't read and was undisciplined.

Tillerson also took a swipe at Twitter - not the president's use of it, but the short attention span it has helped engender in many Americans.

Saying Trump won office using modern-day tools to tap into strong emotions, he added, "I will be honest with you. It troubles me that the American people seem to want to know so little about issues that they are satisfied with 128 characters.

"I don't want that to come across as a criticism of him. It's really a concern I have about us as Americans, and us as a society, and us as citizens."

Tillerson was fired a few hours after returning from a trip to Africa. Though he had been forewarned that Trump was unhappy with him, he learned of his dismissal through a tweet in which Trump congratulated Pompeo and concluded with a breezy, "Thank you to Rex Tillerson for his service!"