Farooq Abdullah Wants Line Of Control To Be Turned Into "Line Of Peace", Invites BJP Criticism

Farooq Abdullah cautioned the centre against taking the people of Jammu and Kashmir "for granted and ignoring" their legitimate aspirations. 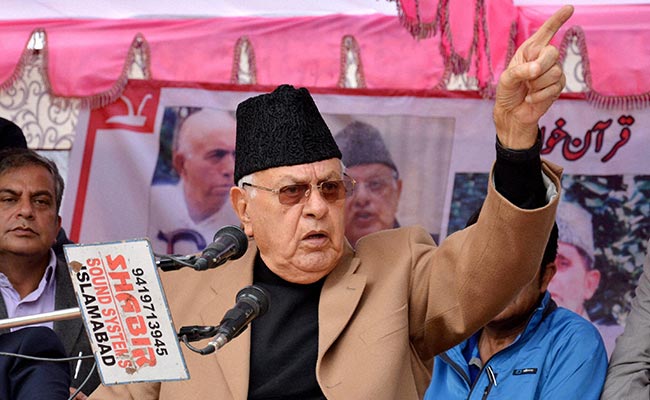 Jammu: National Conference president Farooq Abullah on Sunday argued for the Line of Control (LoC) to be converted into a 'Line of Peace and Goodwill' while India and Pakistan should initiate the dialogue process with an active involvement of the people of Jammu and Kashmir to usher harmony and tranquility in the state.

He cautioned the centre against taking the people of Jammu and Kashmir "for granted and ignoring" their legitimate aspirations. He said the claims that the notes ban had curbed stone pelting had fallen flat and expressed concern that "youth were now taking to guns".

India and Pakistan should resume the dialogue process and engage people of Jammu and Kashmir in an acceptable solution, Mr Abdullah said addressing party workers at Balakote in Poonch district.

Sagacity lies in acknowledging realities and shedding the baggage of the past, he said.

Referring to the Indo-Pak hostilities in 1990s, he said former Prime Minister Atal Behari Vajpayee had invited the then Pakistan president Pervez Musharraf despite the Kargil incursion and his political wisdom worked in terms of a cease-fire agreement which brought cheer to the lives of border people.

"Why can't Vajpayee's spirit be emulated by his political inheritors," he said, giving a warning that extreme positions could lead to devastation and destruction in the entire region.

Reiterating his party's demand for greater autonomy to the state, the former chief minister said internal autonomy within the framework of Indian Constitution and conversion of Line of Control (LoC) into Line of Peace was the pragmatic way forward.

"The people of the state decided their future in 1947 by acceding to Mahatma Gandhi's secular India and they will fight all machinations of reversing these well-established credentials by polarising forces. India is not religion specific but a country of all, irrespective of religion, region and caste. This legacy cannot be trampled on by fringe elements, currently holding the centre-stage in Indian politics, as majority of Hindus disapprove politics of polarisation and division, he said.

Without naming BJP, he said the current spell of governance in New Delhi had created chaos all over, with people feeling their identities threatened and thus taking to streets.

Mr Abdullah expressed concern over the "dicey political situation" saying he would keep his fingers crossed about things to happen in case the present arrangement is repeated in New Delhi in 2019.

India cannot flourish with a myopic political vision. It has been a forward looking country, which has to move forward as a strong, stable and a united nation, he added.

Mr Abdullah cautioned people against the divisive politics, saying attempts were being made to create wedge in the society on the basis of region and religion. All this is being done with a sinister motive of fragmenting Jammu and Kashmir into three different regions, he said and warned those nurturing such a dream.

National Conference would fight these designs tooth and nail, he said.

Earlier at a public meeting at Mandi in Poonch district, Mr Abdullah cautioned the Centre against taking the people of Jammu and Kashmir for granted.

The former chief minister called for earnest initiatives to reach out to the people and urged the Centre to resolve the issues which are essentially political in nature and try to win over the alienated hearts and minds by shunning the policy of creating divisions.

The parliamentarian reiterated the need for Indo-Pak dialogue and said Line of Control (LoC) should be converted into 'Line of Peace and Goodwill' to enable unhindered people to people exchange and trade.

Mr Abdullah said conversion of LoC into Line of Peace would benefit peoples living along the borders on both sides, who have been braving the brunt of hostilities.

He referred to the violence over the alleged "dilution" of SC/ST (Prevention of Atrocities) Act and said machinations are being engineered to end reservation.

"The present dispensation at the Centre is working against the interests of farmers, weaker sections, and minorities," he alleged.

The NC president also blamed the PDP-BJP dispensation in Jammu and Kashmir for "failing" to deliver.

The lack of accountability and mis-governance have added to the miseries of the people, who are feeling let down on every front, he claimed.

The BJP proceeded to train its guns on the National Conference (NC) president for his "Line of Peace and Goodwill" remark and alleged that the opposition party in Jammu and Kashmir had no ideology and only believed in arousing passions by playing with people's emotions for vote-bank politics.

Knowing fully well that there are no takers for azadi (freedom) south of Pir Panjal, Mr Abdullah has very cleverly changed his stance by demanding that the Line of Control (LoC) be converted into a Line of Peace, thus making it amply clear that his party has no ideology and only believes in arousing passions by playing with people's emotions for vote-bank politics, state BJP spokesperson Anil Gupta said in a statement.

The NC has survived as a political party by posing itself as the well-wisher of the Kashmiri-speaking Muslims. It has always been wary of losing prominence due to the challenge posed by the other Muslims like Paharis, Punjabis, Gujjars and Shias in general and the Muslims of the erstwhile Jammu province in particular, Mr Gupta alleged.

The BJP leader claimed that the same fear continued to haunt Mr Abdullah and his party leadership even today and that was why, rather than uniting the population living across the LoC, he advocated it to be made a permanent border.

It was for the same reason that his father, Sheikh Abdullah, had forced former Prime Minister Jawaharlal Nehru to announce a unilateral ceasefire, when the invaders were on the run and the Indian Army was well poised to recapture the areas of Mirpur, Kotli, Poonch, and Muzaffarabad.

Had Muzaffarabad been recaptured, the strategic areas of Gilgit-Baltistan, Hunza and other frontier districts would have automatically returned to India as all the lines of communication to these areas passed through Muzaffarabad. It would also have saved the state from the problem of refugees, which haunts it till date, he said.

Mr Gupta claimed that the NC's dislike for non-Kashmiri speaking Muslim leaders was evident from the fact that when Mirza Afzal Beg resigned from the Maharaja's cabinet in 1945 due to differences within the party, the Maharaja had appointed Mian Ahmed Yar, an NC leader, "but he was, however, expelled from the party because his presence in the council of ministers was not acceptable to Sheikh Abdullah as Yar was a non-Kashmiri speaking Muslim from Jammu .

Promoted
Listen to the latest songs, only on JioSaavn.com
As regards the return of the Haji Peer pass and Chhamb sector by Pakistan, he asked Abdullah to question his ally, the Congress, which not only betrayed the people of the state, but also belittled the sacrifices of the Indian Army by returning to Pakistan the territories captured by it .

Had the strategic Haji Peer pass been in our possession today, there would have been no Uri-Poonch bulge and no question of Pakistan launching a proxy war against us as it would have provided a direct link between Poonch and the Kashmir Valley via Uri, the BJP leader said.