Amid Biting Cold, "Tent City" For Protesting Farmers Near Delhi

While tractor trolleys continue to be the first choice to sleep in for the majority of farmers camping at the Delhi-Haryana highway, the insulated tents are proving to be a welcome addition in providing protection from the winter chill and probable rain. 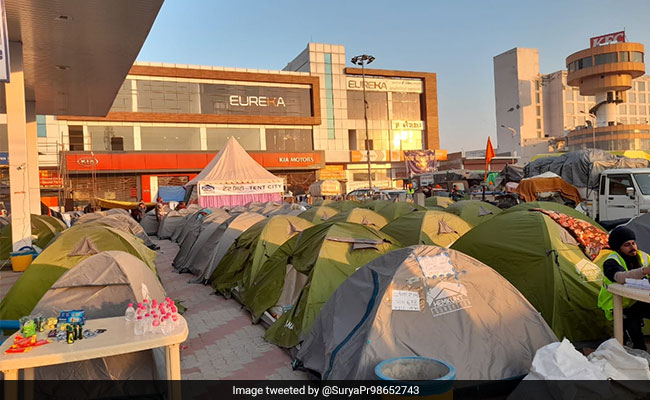 The tents have already crossed the figure of 200 from just 50 on December 12.

A dip in the capital's minimum temperature and scores of women joining the ongoing farmers' protest has resulted in a make-shift "tent city" propping up at a petrol pump in the Singhu Border area.

While tractor trolleys continue to be the first choice to sleep in for the majority of farmers camping at the Delhi-Haryana highway, the insulated tents are proving to be a welcome addition in providing protection from the winter chill and probable rain.

The tents, which more often than not are booked to the capacity, have already crossed the figure of 200 from just 50 on December 12.

They come in three different sizes, depending on which they are available for two, three or five adults along with children.

While the biggest available tent is said to accommodate five people, the farmers, after staying in trolleys for over three weeks, have now learnt the skill of squeezing in and don't mind sharing it with more people if required.

"We knew we had to pitch in the tents. The issue was always about the space required. That is when we had a word with the owner of the petrol pump, and he readily agreed. The very next day - December 12 - we had installed close to 50 tents and from then on the number is only increasing," said Jatin Singh, who is managing the space with his team of six people.

He said they now have 200 tents which they provide to protesters who pitch them up wherever they find space. A tent is available upon providing a refundable security fee of Rs 1,000, Mr Singh said.

The water-proof tents, given by NGO Hemkunt Foundation, come with a set of mattress and blanket. Also, the petrol pump provides water for bathing and has a facility for charging phones or laptops too.

Though there is no check-out time, the check-in time set for availing the shelter of the tents is 6 p.m.

Balveer Singh, 65, who has come from Moga district of Punjab, said it has been a week now since he has been staying here in these tents and has nothing to complain about.

"Sona langi jaanda hai aje tak (It has been comfortable so far). I did stay in the trolley also, and then I got to know about these tents and came here. Since it is all covered, you don't feel very cold here.

"I keep my luggage here, go eat langar, meet people putting up in trolleys, talk to them and come back for rest in the afternoon and at night," said Mr Singh, who is happy to put up with four people in a tent basically meant for two.

These tents are also a great boon to the many women protestors who admitted to getting a sense of privacy in them -- something which they say was amiss in the tractor trolleys.

Ramanpreet Kaur (29) and Sukhwinder Kaur (53), both hailing from Punjab's Bathinda, were visibly happy to find lodging at one of the tents and said now they can get dressed without worrying about privacy and don't have to carry their luggage everywhere.

"Of course, it is less windy (in the tents) and you don't get bitten by mosquitoes as you are all covered. More importantly, you can zip this tent up and change your clothes here without worrying about anything," said Ramanpreet, who has been protesting here since November 30.

"This gives you a sense of privacy and safety, which is very important. So yes, I am indeed happy to find myself a tent here," she said.

Tens of thousands of farmers, mostly from Punjab and Haryana, are staying put at the national capital's border points since late November to protest against the three contentious agriculture laws introduced recently by the Central government.