Farmer Protest Highlights: "Will March Into Delhi On January 26 If Demands Not Met," Say Protesting Farmers

Farmers protest news: Six round of talks have taken place between the Union government and the farmers' unions so far. 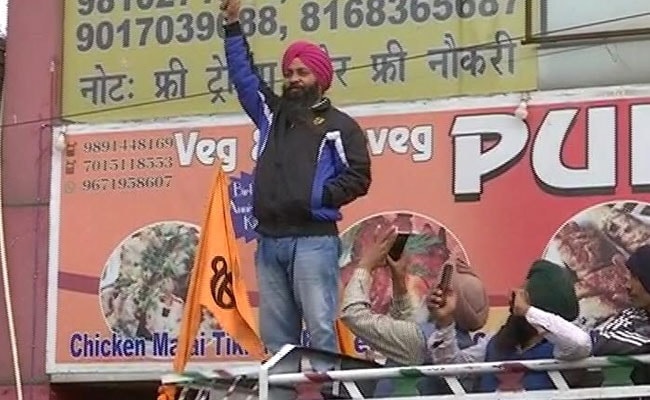 Farmers have threatened to intensify their agitation on January 4. (File)

The protesting farmers today threatened to hold a tractor rally on Republic Day as demonstrations around the national capital's borders escalate. "We have given a call for a tractor parade towards Delhi on January 26. Tractor parade with national flag on January 26 will be called ''Kisaan Parade'', said farmer leader Darshan Pal.

More than 850 faculty members of various educational institutions across the country have come forward with a signature campaign in support of three contentious farm laws, against which thousands of farmers are protesting on borders of the national capital for over a month.

Six round of talks have taken place between the Union government and the farmers' unions so far. While a consensus was reached on issues related to the environment and Electricity Act, the deadlock continued on the two main demands, legal assurance on Minimum Support Price (MSP) and complete rollback of the three farm laws. The next round of talks will take place on January 4.

Here are the highlights on farmer protests in India:

Mr Kejriwal said, "Today, a farmer has lost his life due to extreme cold weather conditions at the Gazipur border. We have lost nearly 50 farmers in this protest against the farm laws. These farms bills are not going to benefit farmers."

"Why is the Centre and the Punjab Government trying to plot against me? It is simply because I''m supporting the farmers," Mr Kejriwal said.

Meanwhile, a number of farmers are protesting at different sites in the state against the contentious Acts.

Rashtriya Loktantrik Party (RLP) has also withdrawn support from the NDA against these acts.
Jan 02, 2021 21:42 (IST)

Farmers Send Legal Notice To 3 BJP Leaders For Allegedly Defaming Protest
Punjab-based farmers have sent legal notices to Union Minister Giriraj Singh, Gujarat Deputy Chief Minister Nitin Patel and BJP leader Ram Madhav for their alleged defamatory/derogatory statement regarding ongoing agitation at various Delhi borders against the agriculture laws.
Jan 02, 2021 21:11 (IST)
Several special trains of Western Railway affected due to farmers protest in Punjab
Due to Kisan agitation in Punjab, train movement has been affected and hence, a few trains of Western Railways have been diverted on Saturday according to the official.


Source: ANI
Jan 02, 2021 21:10 (IST)
Centre acting ''insensitively'' by not listening to farmers' legitimate demands: Priyanka Gandhi
Hitting out at the Central government for "not listening" to the farmers protesting farm laws, Congress leader Priyanka Gandhi on Saturday said that the reports of death of farmers sitting on Delhi borders in this chilly weather are "disturbing" and the Centre is acting "insensitively" towards them.

"The reports of death of farmers sitting on Delhi borders in this chilly weather are disturbing. According to several media reports, nearly 57 farmers have lost their lives and hundreds have fallen sick. The Central Government is acting insensitively by not listening to the farmers'' legitimate demands which has been going on for more than a month", Priyanka Gandhi tweeted.

Farmers Protest News: 75-Year-Old Protesting Farmer Found Dead At Delhi-Ghaziabad Border
A 75-year-old man from Uttar Pradesh was found dead today at a farmers' protest site on the Delhi-Ghaziabad border. While the police probing the case, those at the site say a note written by the dead man, Kashmir Singh Ladi, has been found in which he has expressed his frustration over the stalemate in talks with the government over the new agricultural laws that the farmers want repealed.
Jan 02, 2021 19:16 (IST)
Abandon "obstinate attitude", withdraw new farm laws: Congress to Centre
The Congress on Saturday urged the government to abandon its "obstinate attitude" and agree to the demands of the farmers protesting the new farm laws amid cold weather conditions.
Congress general secretary Priyanka Gandhi Vadra said reports of deaths of farmers while protesting at the Delhi border amid harsh winter conditions are "disturbing".
"According to media reports, 57 farmers have lost their lives while scores are unwell. The government is showing gross insensitivity by not acceding to the demands of the protesting farmers," said the Congress general secretary and its Uttar Pradesh in-charge.
Reacting to a media report that a protesting farmer had reportedly committed suicide, Congress' chief spokesperson Randeep Surjewala said in a tweet, "After Sant Baba Ram Singh from Karnal (Haryana) and Amarjeet Singh from Fazlika (Punjab), the news of Kashmir Singh from Bilaspur (Uttarakhand) sacrificing life in the farmers' movement is very distressing."
"The ruthless government should abandon its obstinate attitude and withdraw the three black laws immediately," Mr Surjewala said in the tweet in Hindi.
Senior Congress leader and former Union minister P Chidambaram saluted the resoluteness of the farmers.
Jan 02, 2021 17:13 (IST)
Farmers to march into Delhi on Jan 26 if demands not met, announces Samyukt Kisan Morcha
The Samyukt Kisan Morcha on Saturday announced that farmers will march into Delhi on January 26 with their tractors, trolleys and other vehicles if their demands are not met and also said that a "farmers'' republic parade" will take place after the official parade.

In its first press conference organized by the 7-member Coordination Committee of the Samyukt Kisan Morcha in the national capital, Samyukt Kisan Morcha, a joint front of almost 40 farmer organisations, also announced their plan of action till January 26 to intensify and deepen the agitation.

A fortnight of a nationwide campaign called "Desh Jagriti Abhiyan" from January 6 to 20 will include rallies, conferences and dharnas all over the country.
Jan 02, 2021 17:01 (IST)
Solution will come in next round of talks: Kailash Choudhary
Minister of State for Agriculture and Farmer Welfare Kailash Choudhary on Saturday expressed his confidence citing that the next round of talks with farmers would bring a solution and conclude the impasse.

Speaking to ANI, Mr Choudhary said, "I am confident that in the next round of talks with farmers a solution will be reached and the ongoing protest will come to an end. The Government of India had already agreed their demands of decriminalising stubble burning, the continuance of power subsidies and provisions of civil courts."

On the issue of two key demands of farmers including a legal guarantee of minimum support prices (MSP) and repeal of three new farm laws, he said, "The three farm laws are in favour of farmers. There should be no confusion on MSP. The prime minister himself said many times that the provision of selling crops at MSP will continue."

"More than 850 academicians across the country have come out in support of the new farm laws, saying that they will change farmers'' fortune and will free farming from all wrong practices. Our government''s commitment to the welfare of farmers is unparalleled," Mr Javadekar tweeted.

Jan 02, 2021 15:31 (IST)
Farmer's death at Ghazipur border while protesting against farm laws disturbing: Akhilesh Yadav
Samajwadi Party president Akhilesh Yadav today termed the death of a 75-year-old farmer due to heart attack while protesting at the Ghazipur border as "disturbing", and accused the ruling BJP of being "heartless".
In a Hindi tweet, he said, "On the first day of the new year itself, the news of the martyrdom of a farmer at the Ghazipur border is disturbing. The farmers are sacrificing their lives in the dense fog and cold, but the ruling party is sitting heartless. The ruthlessness seen in the BJP has never been seen so far."
Jan 02, 2021 15:12 (IST) 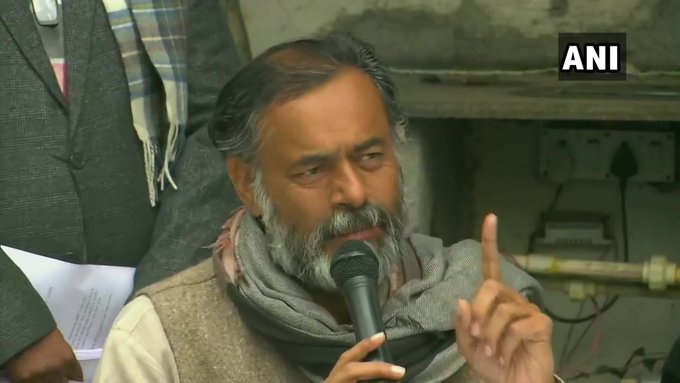 "If our demands are not met till January 26,then farmers will hold 'Kisan Gantantra Parade' in Delhi. We appeal to farmers from adjoining areas of national capital to be prepared & request every farmer family of country to send a member to Delhi if possible," says Yogendra Yadav,Swaraj India. (ANI)
Jan 02, 2021 14:05 (IST)

On 23rd January, we will hold marches towards Governors' Houses in different States, and 'tractor Kisan Parade' will be held on 26th January in Delhi: Krantikari Kisan Union President Darshan Pal#FarmLawspic.twitter.com/y9h3oPmL0Z

Will Hold A Tractor Rally In Delhi On Republic Day, Say Protesting Farmers
Farmers protesting the contentious agricultural laws near Delhi's borders have threatened to hold a tractor rally in the national capital on Republic Day, just two days before the next round of talks with the government to resolve nearly a month-long deadlock.
Jan 02, 2021 13:11 (IST)

Jan 02, 2021 13:08 (IST)
Just In: Protesting farmers say they will hold tractor rally in Delhi on January 26.
Jan 02, 2021 12:49 (IST)
MoS Kailash Chaudhary also added that the agri laws are favourable to farmers. "Regarding contract farming,in the new bill,there can't be an investigation against farmer even if he is at fault. It also states there won't be any agreement regarding land of farmer.The bill is favourable for farmers & PM wants them to become 'atma nirbhar'," he said.
Jan 02, 2021 12:07 (IST)

I am confident that in the next round of talks with farmers,a solution will be reached & ongoing protest will come to an end. Three farm bills are in favour of farmers. They used to demand to get rid of middleman & sell their produce at rate of their choice: MoS Kailash Chaudhary pic.twitter.com/2eBVuKhlsX

Jan 02, 2021 09:50 (IST)
Congress announces farm loan waiver in poll-bound Assam
The Congress on Friday sounded the poll bugle in Assam by announcing waiver of farm debts and microfinance loans for women, implementation of minimum income guarantee scheme ''Nyay'', free electricity up to 120 units for the poor and middle class and ensure at least one job for each family.
Jan 02, 2021 08:59 (IST)
Farmer Dies By Suicide In Madhya Pradesh, Leaves Note Addressed To PM
A 35-year-old farmer died by suicide over alleged harassment by an electricity distribution company at a village in Madhya Pradesh's Chhatarpur. In a note that the farmer, Munendra Rajput, left behind, he requested Prime Minister Narendra Modi to hand over his body to the government to "sell every part of my body and repay dues".
His family members have alleged that officials of the power distribution company (discom) confiscated his flour mill and motorcycle over electricity dues of ₹ 87,000, amid the pandemic. (Read full story here)
Jan 02, 2021 08:08 (IST)

"We're opposing policies of BJP govt. How the bills were passed has set a dangerous precedent. We'll keep fighting for farmers," says a protester pic.twitter.com/eJotAku96s

The protesting farmers will intensify their agitation at Delhi borders if the centre declines their demands of a repeal of the three agriculture laws and giving legal status to the minimum support price guarantee in the next round of talks, scheduled on January 4, politician Yogendra Yadav, speaking on behalf of the farmers' unions, informed on Friday.
The decision was taken Friday at a meeting of the joint front of 40 farmers' unions that has been leading the protests. (Read full story here)
Jan 02, 2021 07:51 (IST)
Six round of talks have taken place between centre and the farmers' unions so far
Six round of talks have taken place between the Union government and the farmers' unions so far. While a consensus was reached on issues related to the environment and Electricity Act, the deadlock continued on the two main demands, legal assurance on Minimum Support Price (MSP) and complete rollback of the three farm laws. The next round of talks will take place on January 4.
Jan 02, 2021 07:50 (IST)
More than 850 faculty members of various educational institutions across the country have come forward with a signature campaign in support of three contentious farm laws, against which thousands of farmers are protesting on borders of the national capital for over a month.