"We have given time to the government till October 2 to repeal the laws," Rakesh Tikait said.

Farmers protesting the agriculture laws will not return home till their demands are met, and will not be pressured into holding talks with the centre, Bharatiya Kisan Union (BKU) leader Rakesh Tikait said Saturday afternoon, after the three-hour chakka jam (blocking) of state and national highways passed peacefully.

Addressing farmers gathered at Ghazipur on the Delhi-Uttar Pradesh border, Mr Tikait also said the protest would extend till October 2 and that the centre had till that date to repeal the laws, failing which the farmer groups agitating against the laws would plan further protests.

"We won't return home unless our demands are met," Mr Tikait, whose tearful appeal after violence during the tractor rally on Republic Day has re-energised protesters, said.

"We have given time to the government till October 2 to repeal the laws. After this, we will do further planning. We won't hold discussions with the government under pressure," he added.

Before the start of today's protest Mr Tikait planted flowers at the Ghazipur protest site - at the same spot where the centre had earlier placed a strip of nails to stop the farmers.

"If they place nails, we will grow flowers. This relationship - between the centre and the farmers - will continue for a long time," he said.

Farmers across several parts of the country - except in UP, Uttarakhand and Delhi - held a chakka jam today, with highways across northern states, including the Eastern Peripheral Expressway around Delhi, blocked in a peaceful protest.

Roads were blocked at 33 places in 15 districts, including Sangrur, Bathinda and Barnala in Punjab. Visuals showed farmers and their tractors camped across highways in large numbers.

However, while the roads were blocked for regular travellers, videos also showed farmers quickly moving barricades aside and allowing ambulances and emergency vehicles past with minimum fuss.

Lakhs of farmers across India are determined to see the laws rolled back. Tens of thousands of them have been camped around the Delhi borders - which have been heavily fortified - since late November. These fortifications include barbed wire fences, concrete barriers and sharpened iron rods.

They say these laws will endanger their livelihoods by, among other things, allowing corporates to exploit them. The farmers also fear the loss of the MSP (minimum support price) system.

Multiple rounds of talks have failed; the centre insists the laws will benefit farmers, and has made it clear it will not scrap the laws. It has, however, offered amendments and an 18-month stay. The farmers have rejected both offers. 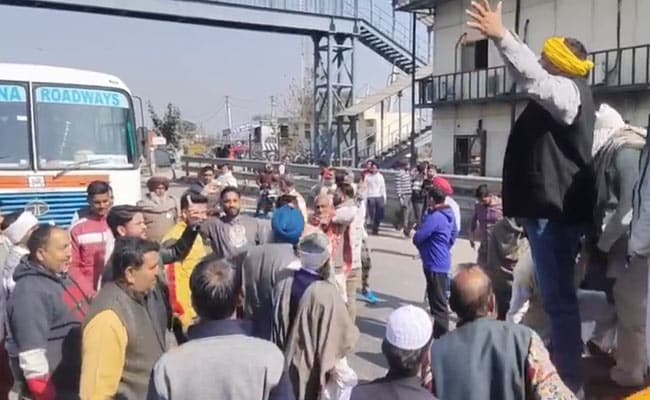 The chakka jam was held in several states in northern India, except UP, Uttarakhand and Delhi

The Supreme Court, which has ordered a temporary stay on implementing the laws, has set up a committee to negotiate a settlement, but the farmers say they will deal only with the centre.

On Friday Rakesh Tikait spoke to NDTV and questioned why the controversial laws - passed in September amid absolute chaos and allegations of rule-breaking - couldn't be scrapped.

"What is the problem in taking back the laws? When they weren't brought with the farmers' consent, he doesn't want the laws, why bring the laws in the first place? They should be taken back and replaced with a law on MSP..." he said.

"We are just protesting. Are we doing anything else... We have nothing to do with politics. We have never told anyone who they should vote for," he asked, dismissing links with opposition parties.

Mr Tikait also stressed on the peaceful nature of the farmers' protest, which veered off course and was hit by violent clashes last month on Republic Day.

Yesterday Agriculture Minister Narendra Singh Tomar, who last month told farmers "the ball is in your court now", told parliament the protests were limited to "one state" - Congress-ruled Punjab - and that critics had "failed to point out a single flaw".