Students of several universities across the country have been protesting against the JNU attack. A protest also broke out on the IIM-Ahmedabad campus on Monday 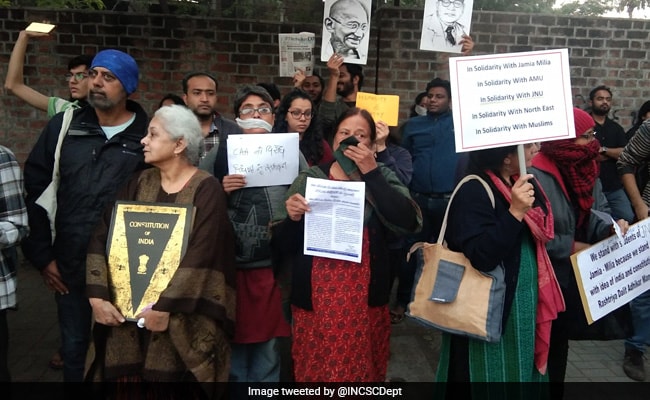 Pakistani poet Faiz Ahmad Faiz's poem "Hum Dekhenge" has become the protest anthem at the Indian Institute of Management (IIM) Ahmedabad, where students have launched an agitation against the Sunday attack on Delhi's Jawaharlal Nehru University (JNU). The Urdu poem, which is being probed by IIT-Kanpur over the allegation that it is anti-Hindu, was recited on Wednesday by their counterparts in Ahmedabad while carrying banners to show solidarity with JNU, news agency ANI reported.

A masked mob, armed with sticks, stones and sledgehammers, had barged into the JNU campus and thrashed students and teachers. Over 30 people, including students and professors, were injured in the attack. The JNU students' union had blamed ABVP- a student body linked to the BJP - for the attack.

Students of several universities across the country have been protesting against the JNU attack. A protest also broke out on the IIM-Ahmedabad campus on Monday; several students shouted slogans in support of JNU.

IIM-A Director Errol D'Souza had condemned the attack, dubbing it as a "very low point" in the country's post-Independence history.

"A university stands for tolerance, dialogue and an agreement to disagree. Violence is anathema to the idea of a university and violates the foundations of a civilization. The incidents yesterday on the JNU campus are a very low point in our post independence history," he tweeted on Monday.

The Urdu poet from Pakistan's Sialkot - a communist and an atheist - was nominated for the Nobel Prize in Literature in 1963. He used religious metaphors in his poetry to attack the establishment.

Faiz Ahmad Faiz was jailed several times for his writings. He wrote "Hum dekhenge... (We will see)" - one of his best remembered compositions - in New York in 1979.

An inquiry committee was set up by IIT Kanpur after getting a complaint over the students reciting the poem before a solidarity march on December 17, for their counterparts at Delhi's Jamia Millia Islamia University, where violence broke out during a protest against the Citizenship (Amendment) Act on December 15.