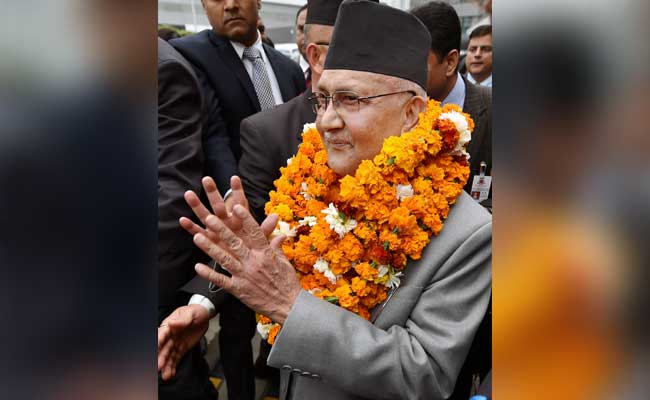 Kathmandu: As Prime Minister KP Oli began his visit to India, Nepal on Friday warned that failure to implement past bilateral agreements and projects may lead to a "deficit of trust", even as the country is set to sign a trade and transit treaty with China.

"The main aim of the prime minister's visit to India will be to strengthen friendly ties between the two countries," information minister Sherdhan Rai said.

"No doubt, the bilateral relations have passed through a rough phase and there have been some misunderstanding between the two countries in the recent period due to certain reasons.

We need to clear the misunderstandings, and there is also a need to make Nepal-India relations strong and vibrant for all time," he said.

The six-day visit is PM Oli's first to a foreign country since taking over as prime minister some five months ago.

Besides, many development projects have been signed between Nepal and India in the past which were pending for various reasons and "there is a need for expediting implementation of these projects," Mr Rai said adding the visit would be fruitful towards that direction.

"If past agreements and understandings are not translated into reality it may lead to a deficit of trust," he said.

"Therefore we want to implement the past understandings and agreements in their letter and spirit," he said adding important dialogue will be held between officials of the two countries keeping Nepal's national interest.

PM Oli will also be visiting China shortly after his return from India, he said.

"The visit will be a historic one and fruitful for the country. Some people have been making remarks that Nepal was playing China card and the PM's forthcoming visit to the northern neighbour will be just a formality," he said.

"However, we are laying down important foundations for making the proposed visit a fruitful one. Nepal government has made necessary preparations for signing trade and transit treaties with China during the upcoming visit," Mr Rai said.

Concrete foundations have been laid towards that direction after the formal talks were held between the officials of the two countries, he added.

"The government is also working out grounds for fuel trade with China on long term basis and efforts are on to open and operationalise more trading points in the country's northern border with China.

"Besides these, other important agreements and understanding will be reached with China keeping our national interest at the centre and development needs of the country in mind," he said.

(This story has not been edited by NDTV staff and is auto-generated from a syndicated feed.)
Comments
Prime Minister KP OliSherdhan RaiNepal PM in India