Exclusive: In Kargil War, India Was Minutes Away From Bombing Pak Bases

In the early hours of June 13, 1999, at the height of the Kargil War, Indian Air Force fighter pilots were minutes away from launching a full-fledged air attack deep inside Pakistan. Targets had been assigned, route maps finalised; personal revolvers to be carried by pilots had been loaded with ammunition and Pakistani currency collected, for use if pilots had to eject on the other side of the Line of Control and orchestrate an escape.

These plans, laid out in documents of the Indian Air Force accessed exclusively by NDTV, show that fighter pilots were minutes away from crossing the Line of Control or de facto border in Kashmir on bombing missions, a move which would have likely escalated the controlled Kargil conflict into a full-fledged war between the nuclear-armed neighbours.

The Air Force's plans for an unmitigated attack were the result of collapsed talks in Delhi between Jaswant Singh, then Foreign Minister, and his Pakistani counterpart, Sartaj Aziz. On a mission to negotiate the end of the war to Delhi, Mr Aziz had been given clear terms  - withdraw Pakistani intruders from the Kargil mountains,  abandon the demand for redrawing the Line of Control or de factor border in Kashmir, urgently restore the  status quo by accepting the Line of Control as it had been defined for decades,  and punish those who tortured six Indian soldiers, including Captain Saurabh Kalia, whose mutilated body had been returned with the bodies of the jawans he was leading in an operation in North Kashmir when they were captured by Pakistani soldiers.

In the end, the talks were deadlocked. New Delhi had had enough. 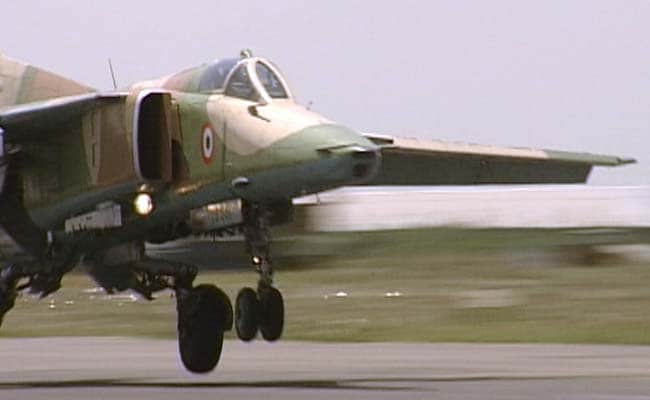 In all, 16 fighter jets were to be deployed across enemy lines in this massive attack

What was about to follow is laid out in an official record of the plans of the Air Force, accessed exclusively by NDTV. "On the 12th [of June], Sartaj Aziz went back after a failed visit to India.  All pilots were called back at 1600 by Gupta, who had news for us.  CATOs [Command Air Tasking Orders] had come for a pre-emptive strike at dawn on 13 Jun," reads the Squadron Diary of the Air Force's 17 Squadron, the "Golden Arrows", a formation that flew MiG 21s from the Srinagar Air Force base.

"We were to do a 4 ac [aircraft] bombing mission in POK [Pakistan Occupied Kashmir] and BDA [Bomb Damage Assessment] of Chaklala [a major Pakistani Air Force Airbase in Rawalpindi.]  Tony, Pradeep, Chou & Doc planned for first mission and Dhali, Gupta for the second. Pal was maha miffed at being left out," the diary elaborates.

Assigned their targets, the pilots then went about the business of preparing for their mission: "We all returned at night after making Wiznavs [software used to calculate routes], golas [loading bullets into personal revolvers], maps and collecting Pak currency." 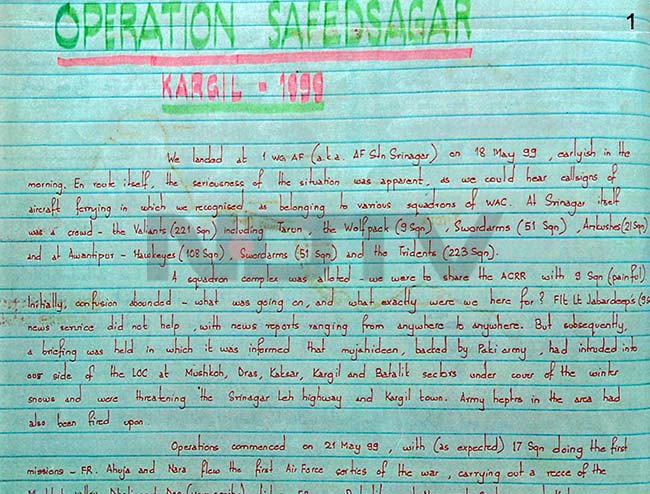 The Air Force's plans for the attack were the result of collapsed talks with Pakistan in Delhi.

The clock was ticking.  Within hours, the Indian Air Force would launch its first attacks in Pakistan since the 1971 war, aerial attacks against a country that may have had nuclear weapons in its inventory.

"At 0430 on 13th [June] morning, we reported to the sqn [squadron], ready for war. But it was NO GO - EXORs (Execution Orders) had not been received. We stood on standby till morning, then finally stood down at 1230."

The "Golden Arrows" were not the only squadron on the verge of flying into Pakistan in June 1999. Speaking to NDTV, a former MiG-21 pilot deployed in the region has also confirmed receiving orders to fly across the Line of Control. The pilot, who does not want to be identified, has said, "I was having dinner. We were sent to the base operations room. There was a gentleman from Command. He said `the balloon is going up in the morning, you guys will be in the first strike mission.' "

2 MiG 21s were assigned as "tied escorts" to four MiG-27s from another unit who were ordered to target the runway at the Chaklala airbase using runway denial bombs (bombs that create large craters in runways, preventing their use).  As "tied escorts," the pair of MiG-21s would provide cover to the MiG-27 ground attack fighters in case they were intercepted by Pakistani fighter jets.

Four other MiG-21s were part of the attack mission, in addition to four MiG-29s air superiority fighters, which would be deployed to sweep the Pakistani skies before the Indian "strike package" approached their targets. Photo reconnaissance of the strike mission to gauge its effectiveness would subsequently be carried out by two other MiG-21s.

In all, 16 fighter jets were to be deployed across enemy lines in this massive attack, the first in a wave of missions. Several other squadrons were assigned separate targets.

"We took [Pakistani] currency and wrote letters home.  Takeoff was at 6:30 am. As youngsters, we were jumping around.  The mission was called off at about 12 am.  At the squadron, we received our `No Go' orders at 3 am," the diary notes.

The mission itself came with extraordinary risks; the possibility that a few jets would be shot down was very likely. Pakistan's premier fighters, the F-16s, were waiting on the other side, flying patrols between Pindi and Kahuta to detect and intercept any Indian strike mission.

But F-16s were not the only danger. India's fighter pilots were acutely aware of the threat posed by French-made Crotale and Chinese made HQ2B Surface to Air Missiles (SAMs) meant to destroy incoming Indian aircraft. With a range of 10 kms, Crotale SAMs would fly towards the Indian fighters at a speed of more than twice the speed of sound if they locked on to their targets. And the Chinese HQ2B was no less a threat. With a large 190 kg warhead, the missile could engage targets more than 20 kilometres away, flying towards incoming Indian jets at a speed of 1,150 metres per second. If the missile was close to an Indian jet, its "proximity fuse" would go off triggering the warhead which would explode. No Indian fighter would likely survive the blast.

However, at the time of the Kargil war, the Indian Air Force had a distinct advantage. Not only did India have more fighter jets than Pakistan, but they were also armed with better weapons to intercept the enemy. Unlike India's MiG-29s and Mirage 2000s, Pakistani fighters did not have any long-range air-to-air missiles and would only have been able to engage IAF fighters in a dogfight within the range of their short-range US-supplied Sidewinder missiles. It was perhaps this key advantage that made the government almost decide on going ahead with strikes in Pakistan, though the reasons for India's eventual decision to not escalate the Kargil situation remain a closely guarded secret.

By July 1999, the Indian Army was able to regain territory held by Pakistani forces who were forced to retreat.