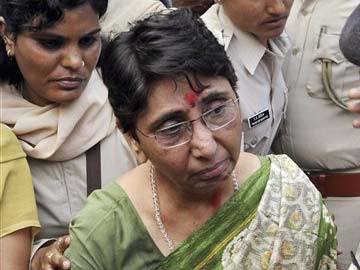 Ahmedabad: Maya Kodnani, a former minister in the Gujarat government who has been sentenced to 28 years in prison for the riots of 2002, will remain on bail for now, the Gujarat High Court said today.

Yesterday, Ms Kodnani was granted bail on medical grounds. She has been in a hospital in Ahmedabad for the last few months.

A Special Investigating Team appointed by the Supreme Court  had asked the  High Court to suspend Ms Kodnani's bail while it appeals against the decision in the top court.  The High Court refused that request today.

Two years ago, Ms Kodnani, 59,  was found guilty of murder for the bloodiest episode of the communal riots in Gujarat in 2002 in which more than 1,000 people were killed, most of them Muslims. Narendra Modi was then serving his first term as Chief Minister.

Promoted
Listen to the latest songs, only on JioSaavn.com
Ms Kodnani was described by the court as "the kingpin" of the Naroda Patiya massacre in which more than 90 people were killed.

Ms Kodnani, a gynaecologist, served as Minister for Women and Child Development in Mr Modi's government from 2007 to 2009, when she was first arrested for the riots.