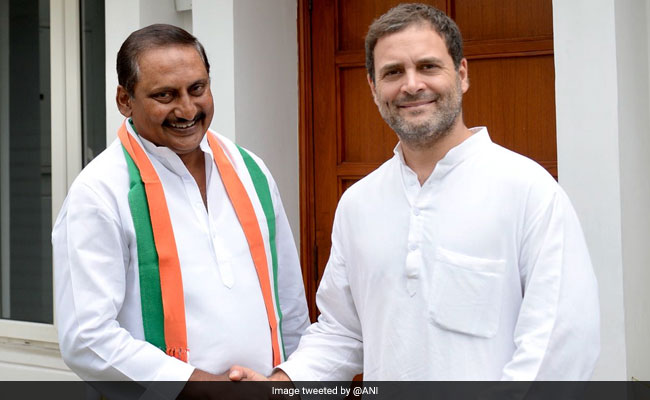 Mr Reddy, along with many of his associates, met the party chief and decided that they would work for strengthening the Congress, Mr Surjewala said.

Speaking to reporters after joining the Congress, Mr Reddy asserted that unless a Congress government comes back in Delhi, justice will not be done to the states of Andhra Pradesh and Telangana.

Assurances given by the then prime minister Mr Manmohan Singh in Rajya Sabha should also be implemented in totality, he said.

Expressing his happiness on returning to the Congress fold, Kiran Reddy said he cannot be separated from the party because whatever identity he has got was because of the Congress.

Mr Chandy, welcoming Mr Reddy into the party said, "When he was the chief minister, he did many good things for the state, especially for the welfare of the Scheduled Castes and Scheduled Tribes. He did a lot of things for the development of Andhra Pradesh."

Asked if the Congress would support a no-confidence motion against the government over the issue of special status to Andhra Pradesh in the upcoming Monsoon Session of Parliament, he said the decision will be taken by the Congress Parliamentary party.

Mr Reddy had quit as chief minister and the Congress in February 2014, protesting against the bifurcation of Andhra Pradesh.

His meeting with the Congress chief came following talks with the party's leaders over two months.

Mr Reddy, the last chief minister of united Andhra Pradesh, had floated the Jai Samaikya Andhra party after quitting the Congress. He fought the 2014 elections, but failed to make a mark.